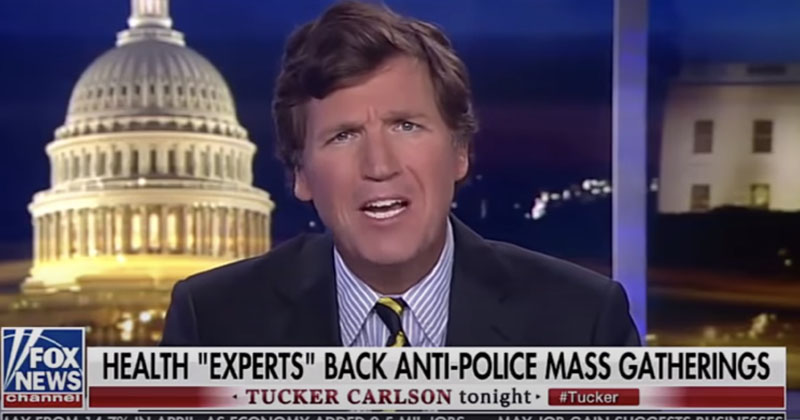 Fox News host Tucker Carlson took a flamethrower to the thousands of healthcare professionals who signed a letter of approval for the Black Lives Matter protests because they claim “white nationalism” is also a public health crisis.

Carlson explained on Friday how only few weeks ago, Americans were ordered to essentially surrender their rights and livelihoods in the name of public health amid the coronavirus pandemic.

But now, 1,200 healthcare workers signed onto a letter condemning defiance of stay-at-home orders with the exception of Black Lives Matter protests because “those actions not only oppose public health interventions, but are also rooted in white nationalism and run contrary to respect for Black lives,” the letter said.

Carlson called them out on their lying and virtue-signaling.

“In other words, anybody who complains about being locked down is a racist, except the people who refuse to be locked down because they are protesting racism. Heads, I win. Tails, you lose,” Carlson said.

“These are public health officials,” he continued. “This is insanity. Just days ago you were told that any kind of gathering could kill thousands of people. You would be a murderer. You would be a genocidal murderer. That is before we learned that viruses have their own woke political agenda and the only rallies we should ban are those being held by people who have the wrong ideas, people who want to earn a living or go to church. Those protests are racism. Oh.”

“But this is a sham,” Carlson concluded. “It was a front for tyrants to inflict their personal neuroses and their desire for control on the United States of America and to do it outside the democratic process, outside democratic norms. Every person who signed this letter is a faker, none of them represents science, we should never listen to any of them again.”