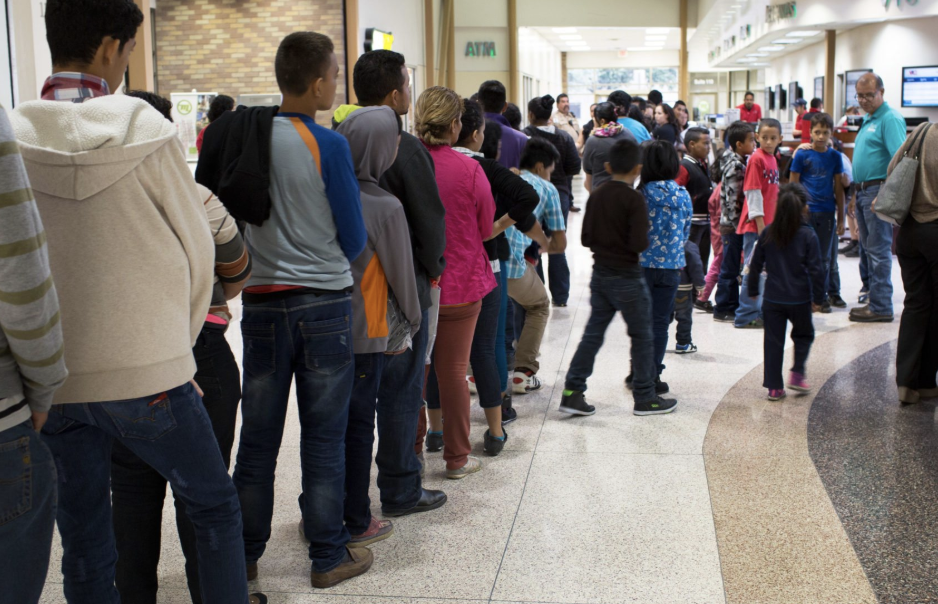 Democrats like to deride President Trump’s warnings about a crisis at the southern border as a “fake emergency” reliant on “nonsensical” numbers about the flow of migrants. They even tried, and failed, to terminate his emergency declaration, which has also triggered a flurry of lawsuits, but that won’t change the fact that the first tranche of money from Trump’s expanded border wall has already been approved by the DoJ.

And the timing couldn’t have been better, because over the past month, as reports about the number of migrant families declaring asylum between border checkpoints climbing to an all-time high were picked up by the mainstream press,  the true weight of the ongoing disaster at the border has suddenly become difficult to ignore. Even the peso, which had mostly shrugged off his prior threats, tumbled when Trump warned that he would close the border next week if Mexico doesn’t try to stop illegals from entering the US.

And in the latest report that, like the others, will be difficult for the public to chalk up to more conservative fear mongering, USA Today published a story on Saturday about a border city that has seen public resources overwhelmed as asylum seekers are released into the city at a rate of more than 800 per day.

The city is McAllen, Texas, which has seen a surge of migrants crowding church shelters and other resources in the community as ICE has been forced to release more asylum seekers as they await their immigration hearings. ICE shelters have simply become too overcrowded, and the agency, which can hold migrants for up to 20 days, longer than the 72 hours for the border patrol, has few alternatives.

Under a bridge connecting the U.S. with Mexico, dozens of migrant families cram into a makeshift camp set up by U.S. Customs and Border Protection. The families are there because permanent processing facilities have run out of room.

Alex Jones presents a report produced by CNN where Latino voters living along the border in Texas make it completely clear that they want the wall, and in fact, they want it taller and longer than its current construction.

Seven hundred miles east, busload after busload of weary, bedraggled migrants crowd into the Catholic Charities Humanitarian Respite Center in McAllen, Texas. Organizers there are used to handling 200 to 300 migrants a day. Lately, the migrants have been arriving at a clip of around 800 a day, overflowing the respite center and straining city resources.

Along the Texas border with Mexico – from El Paso to Eagle Pass to the Rio Grande Valley – masses of migrants have been crossing the border in unprecedented numbers, overwhelming federal holding facilities and sending local leaders and volunteers scrambling to deal with the relentless waves of people.

With the border patrol on track to apprehend 100,000 migrants during the month of March – a new monthly record – Customs and Border Protection Commissioner Kevin McAleenan said Wednesday during a speech in El Paso that the border had reached its “breaking point”. He urged Congress to do something – though it seems the Democrat-led House is preoccupied with stymieing Republican efforts to secure more money for border security. “The surge numbers are just overwhelming the system”, McAleenan said.

Theresa Brown, director of immigration and cross-border policy at the Bipartisan Policy Center, who was a CBP policy adviser under both President Obama and President Bush, put it even more bluntly: “This is a system-wide collapse”.

When migrants who have made it through the first round of the asylum process arrive in McAllen, they are typically released to the Catholic charities in town, which have also become overwhelmed.

In McAllen, migrants deemed to have credible asylum cases are released to the Catholic Charities respite center, where they’re allowed to shower, given medical attention and helped with getting a bus or airplane ticket to their final U.S. destination.

Sister Norma Pimentel, who oversees the shelter, said she received a phone call two weekends ago from a Border Patrol official warning that the numbers were about to skyrocket. The next day, around 800 migrants showed up to the shelter, she said.

On Wednesday, clusters of migrants crowded the halls of the center. Lines stretched down long halls, as migrants waited to use the shower or pick up diapers. Teams of volunteers called migrants’ relatives to get bus tickets. Every 20 minutes or so, a new tour bus would drive up and deliver another 50 migrants into the shelter.

As the charity’s respite center started to overflow, the town has gotten involved, opening new shelters and bringing in city buses for transportation. Local officials are applying for federal disaster grants to compensate them for the hundreds and thousands of dollars already drained from city coffers.

As the respite center started to overflow last week, city officials got involved, opening new shelters and contracting buses to take the migrants directly to shelters rather than have them cluster around the bus station downtown.

Rodriguez, the city manager, said he’s dedicated several city officials to spearhead the problem and the city’s spending thousands of taxpayer dollars a day on the buses and other services.

He’s lobbied the federal government for reimbursement, but he’s not overly hopeful. In 2014, when a similar crush of Central American migrants strained city resources, local officials applied for $600,000 in federal disaster funds. After years of wrangling, they got just $140,000, he said.

“This is very similar to what we saw then,” Rodriguez said. “It’s real people and real time and real money.”

So, Nancy Pelosi, tell us again how the border crisis is a “made up emergency?”?