Suspected vandals who defaced a Jewish cemetery in Massachusetts Monday used the phrase, “This is MAGA country!,” leading many to question whether the act could be a hate crime hoax similar to the one allegedly perpetrated by Empire actor Jussie Smollett.

However, one marked gravestone in particular stood out among others, with the curious expression, “This is MAGA country!” a phrase which gained notoriety after Smollett attributed it to white Trump supporters he alleged beat him and threw a noose around his neck in Chicago.

Many on Facebook were quick to question the vandals’ use of the phrase, especially in light of the Smollett incident. 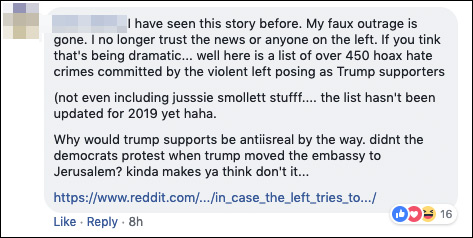 Smollett’s version of events was brought into question after two men he supposedly paid to attack him confessed he staged the entire incident.

Smollett maintains his innocence despite overwhelming evidence that was publicly laid out by the prosecution after he was initially charged.

If convicted, Smollett faces up to three years in prison.

Fall River Police and the Anti-Defamation League are offering rewards of up to $1,500 for information that can lead to the arrest of the individuals responsible.