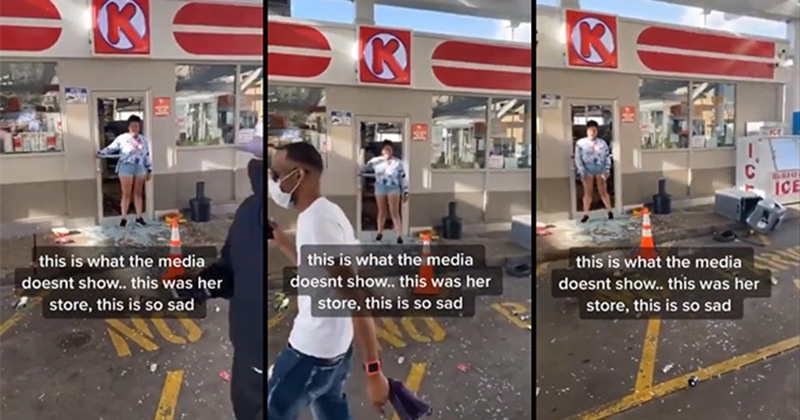 “So ya’ll didn’t care if this was a Black-owned gas station or not?” a woman screams. “This is my s**t, yo, I was protesting with y’all till y’all just broke into my s**t!”

“She ain’t lying though, they breaking the wrong s**t,” the man filming the video comments.

The video appears to have first been uploaded to Tiktok.

It was reuploaded to Twitter in response to a viral photograph of a pet supply store in Santa Monica, California with a sign to dissuade rioters from destroying a shop saying, “Single mother-owned, please show mercy, this is all I have.”

To those asking & wanting to help this mom, judging from the original photo, this looks like it’s a pet supply store in Santa Monica, CA pic.twitter.com/4eKUNZ7F6v

Similar signs have gone up throughout the country during the past three months of daily rioting.

Healthy society update: doesn’t seem healthy for so many small business owners to have to declare their ethnic status pic.twitter.com/MCTnNFynsh

Owner of Mexican convenience store across the street tells me whites also broke into his store and stole items/smashed things before armed security arrived. Here’s what he put on the exterior pic.twitter.com/6YtjNUyxAC

Burning, looting and murdering is fine just so long as the target is White people!