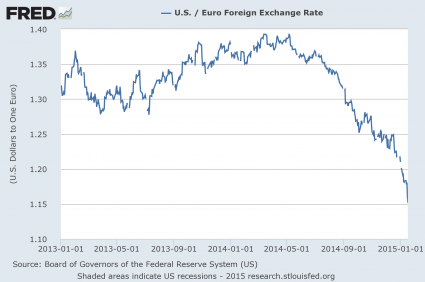 The long-anticipated collapse of the euro is here. When European Central Bank president Mario Draghi unveiled an open-ended quantitative easing program worth at least 60 billion euros a month on Thursday, stocks soared but the euro plummeted like a rock.  It hit an 11 year low of $1.13, and many analysts believe that it is going much, much lower than this.  The speed at which the euro has been falling in recent months has been absolutely stunning.  Less than a year ago it was hovering near $1.40.  But since that time the crippling economic problems in southern Europe have gone from bad to worse, and no amount of money printing is going to avert the financial nightmare that is slowly unfolding right before our eyes.  Yes, there may be some temporary euphoria for a few days, but it is important to remember that reckless money printing worked for the Weimar Republic for a little while too before it turned into an utter disaster.  Now that the ECB has decided to go this route, it is essentially out of ammunition.  The only thing that it could potentially do beyond this is to print even larger quantities of money.  As the global financial crisis begins to unfold over the next couple of years, the ECB is pretty much going to be powerless to do anything about it.  Over the next couple of months, we can expect the euro to continue to head toward parity with the U.S. dollar, and eventually it is going to go to all-time lows.  Meanwhile, the future of the eurozone itself is very much in doubt.  If it does break up, the elite of Europe will probably try to put it back together in some sort of new configuration, but the damage will already have been done.

Over the next 18 months, the European Central bank will create more than a trillion euros out of thin air and will use that money to buy debt.  The following is how this new QE program for Europe was described by the Telegraph…

“The combined monthly purchases of public and private sector securities will amount to €60bn euros,” said Mr Draghi at a press conference following a meeting of the ECB’s governing council.

“They are intended to be carried out until end-September 2016 and will in any case be conducted until we see a sustained adjustment in the path of inflation,” he added, meaning the package will amount to at least €1.1 trillion.

Mr Draghi’s package of asset purchases, including bonds issued by national governments and EU institutions such as the European Commission, is intended to boost the eurozone’s flagging economy and to ward off the spectre of deflation.

When you print more money, you drive down the value of your currency.  And the euro has already been crashing for months as you can see from the chart below…

As I write this, the euro is down to $1.13.  And most analysts seem to agree that it is likely heading even lower.

How low could it ultimately go?

One prominent currency strategist recently told CNBC that he believes that it is actually heading beneath parity with the U.S. dollar…

The euro plunged to an 11-year low on Thursday, after the European Central Bank announced that it would begin a 60-euro monthly asset purchasing program. But it could still have a ways to fall.

Brown Brothers Harriman global head of currency strategy Marc Chandler predicts that the euro, which fell as low as 1.1362 on Thursday after trading near 1.4000 in May, is heading below 1.0. That widely watched level is the point at which it will just take a single U.S. dollar to purchase a euro, a condition known in the currency markets as “parity.”

I totally agree with Chandler.

In fact, I believe that the euro is ultimately going to break the all-time record low against the dollar.

I also believe that the current configuration of the eurozone is eventually going to fall to pieces.  The euro may survive as a currency, but Europe is ultimately going to look a whole lot different than it does right now.

In fact, we could see things start to come apart for the eurozone as soon as Sunday.  If Syriza wins a decisive victory in the upcoming Greek elections, it could create all sorts of chaos…

The polls put Alexis Tsipras and Syriza ahead of the ruling New Democracy party of Greek Prime Minister Antonis Samaras.

Tsipras has vowed to convince the ECB and euro zone to write down the value of their Greek debt holdings to allow him to increase public spending and stimulate job growth.

“There is a good chance they could win, and if they begin moving away from fiscal austerity, other members of the EU are going to say: ‘No more lending, no more life support.’ On Monday morning you’ll know,” De Clue said.

But of course Europe is far from alone.  Financial problems are erupting all over the planet, and central banks are getting desperate.

Over the past week, seven major central banks have made moves to fight deflation.  But the more that they cut interest rates and print money, the less effect that it has.  And eventually, the people of the world are going to seriously lose confidence in these central banks as they realize what a sham the system really is.

“My belief is that the big surprise this year is that investor confidence in central banks collapses. And when that happens — I can’t short central banks, although I’d really like to, and the only way to short them is to go long gold, silver and platinum,” he said. “That’s the only way. That’s something I will do.”

Do you agree with Marc Faber?

And what do you think is next for the euro?

Do you agree with me that it is going to record lows?