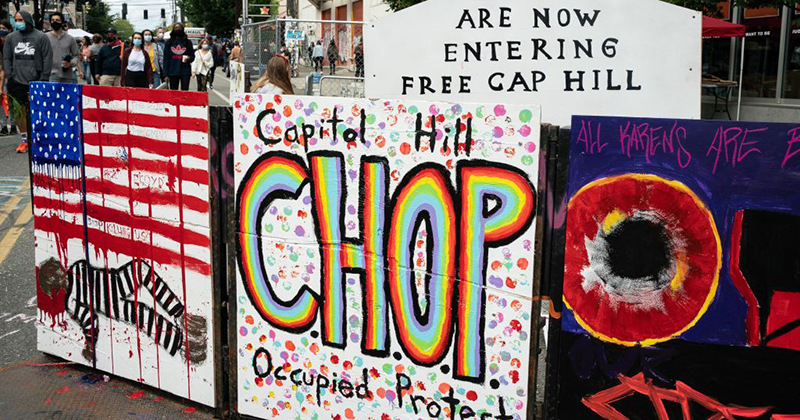 Those who refuse to embrace their movement could face a violent end, a group of protesters in Seattle have declared. The unsettling warning comes after their encampment in the city was renamed to CHOP.

A group of demonstrators who gathered outside Seattle’s West Precinct on Sunday night had a chilling message for anyone who hasn’t pledged fealty to their radical demands, which include the abolition of the city’s police department and a complete transformation of the criminal justice system.

One demonstrator with a megaphone explained a possible secondary meaning behind the decision to rebrand their camp, the Capitol Hill Autonomous Zone (CHAZ), to ‘CHOP’ (‘Capitol Hill Organized Protest’ or ‘Capitol Hill Occupied Protest’, depending on who you ask).

“Does anybody know what happened to the people who did not get on board with the French Revolution?” he shouted. “Chopped,” his compatriots yelled in reply.

“Does anybody know what happened to the people who did not get on board with the French Revolution?”

The megaphone-wielding protester then reaffirmed the gravity of the threat: “That is the message we need to send. We are serious. This is not a joke.”

The proclamation was met with considerable skepticism – and mockery – on social media.

Others noted that many of those who started the French Revolution ended up “chopped.”

Nobody tell them that the people who started the French Revolution also eventually got their heads chopped off and absolute monarchy didn’t end in France until 1870 https://t.co/pSpUjeXuHR

Protesters barricaded streets around Seattle’s East Precinct last week, which had been abandoned by police. Seemingly overnight, the area transformed into a camp for BLM activists and other demonstrators. Supporters say the encampment serves as an example of community cooperation and self-policing, but the message has been mired by violence and lawlessness.