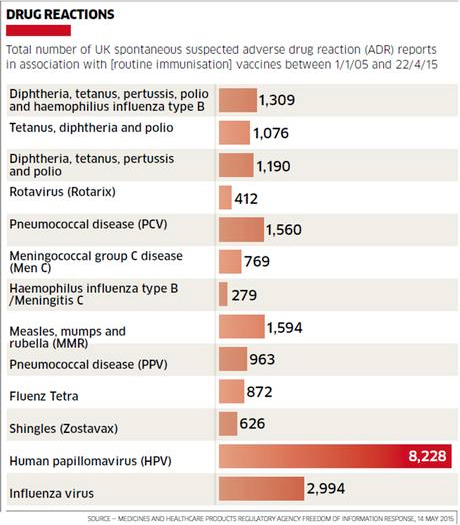 Thousands upon thousands of girls in the United Kingdom have suffered adverse reactions as a result of receiving HPV vaccinations, with more than 2,500 of those enduring “serious” debilitating illnesses, a UK government agency reports.

A recent Freedom of Information request seeking the number of people injured by vaccines in the UK revealed the human papillomavirus vaccine was responsible for over 8,200 injuries in the past 10 years, a startling figure which directly contradicts health authorities reassurances.

Officials with the UK Medicines and Healthcare Products Regulatory Agency admit the numbers are not exact because of an “unknown and variable level of under-reporting.”

In the US, the National Vaccine Information Center estimates “Fewer than 10 percent, perhaps only one percent of all serious health problems following vaccination are ever reported to U.S. federal health agencies.”

“This means that – instead of the more than 15,000 bad health outcomes following Gardasil vaccination that have already been reported in America – actually there could have been between 150,000 and 1.5 million adverse health events following Gardasil shots which have never been counted,” reports the NVIC’s Barbara Loe Fisher.

On Sunday, The Independent documented one family’s struggle to have health authorities recognize a young, healthy girl’s HPV vaccine injury which manifested two weeks after her first jab.

“The symptoms grew increasingly worse after the second and third injections, and I went to A&E [Accident & Emergency] several times with severe chest and abdominal pains as well as difficulty breathing,” a West Yorkshire teen named Emily, 17, recounted. “One time I couldn’t move anything on one side of my body. I didn’t know what was happening.”

Emily’s mother, Caron Ryalls, recalled being met with ridicule by doctors when she brought up the possibility Emily’s illness was vaccine-derived.

“Every visit to a doctor was met with rolled eyes,” Emily’s mother said. “Every mention of the HPV vaccination was met with hostility and ridicule. We were eventually referred to a local paediatrician who told her to push herself to get back to normal – ‘We all feel tired in the mornings, Emily’ was one of the remarks regarding her complete exhaustion.”

Despite the widespread prevalence of adverse reactions, the regulatory agency insists the “expected benefits in preventing illness and death from HPV infection outweigh the known risks.”

“The greater number of reports for HPV vaccine does not necessarily mean that it is any less safe than other vaccines,” the health agency reiterated.

“In other cases many girls injected with the vaccine fell to the floor, injuring their head or face and some fracturing their jaw or teeth,” the government watchdog noted.

“We want to have a stronger voice and we are pushing hard for regional treatment and assessment centres along the lines of Denmark and Japan,” Ryalls said in a statement. “We want increased reporting of adverse reactions, better educational support and greater transparency and information to enable parents to make an informed decision regarding consent to HPV vaccination.”

“I’m not anti-vaccination,” she says, “but it’s a big area with a lot of questions. I would never say to anyone don’t have it, because it has to be a personal choice. I would say do your own research and don’t just rely on the school leaflet.”