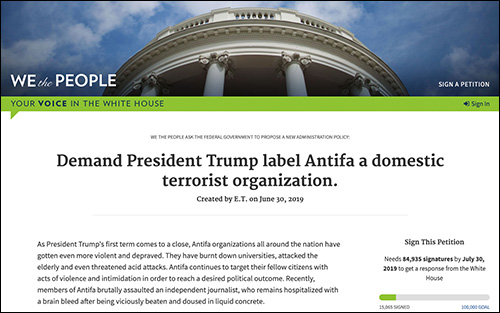 A petition calling on President Trump to label the far-left Antifa group a terrorist organization has received over 15,000 signatures in under 24 hours, after members were seen violently assaulting journalists and others at a Portland demonstration over the weekend.

The petition asks the president to make the designation in light of the violence seen from Antifa in the past few years, committing everything from brutal assaults to acid attacks against members of the public who hold different political views, all while wearing masks to conceal their identities.

“As President Trump’s first term comes to a close, Antifa organizations all around the nation have gotten even more violent and depraved,” the petition begins.

“They have burnt down universities, attacked the elderly and even threatened acid attacks. Antifa continues to target their fellow citizens with acts of violence and intimidation in order to reach a desired political outcome.”

“Recently, members of Antifa brutally assaulted an independent journalist, who remains hospitalized with a brain bleed after being viciously beaten and doused in liquid concrete,” the petition’s author, “E.T.,” adds referring to the recent beating of Quillette Magazine journalist Andy Ngo at a Portland protest Saturday.

First skirmish I’ve seen. Didn’t see how this started, but @MrAndyNgo got roughed up. pic.twitter.com/hDkfQchRhG

By the end of the event police had reportedly arrested three Antifa members charged with assault, assaulting a police officer and other crimes.

The White House petition must receive 100,000 signatures by July 30 in order to eligible for a White House reply.

Another petition at Change.org, which has received close to 5,000 signatures as of writing, is also asking the FBI and the Department of Homeland Security to “Declare Antifa a Domestic Terrorist Organization.”

The petitions come as Texas Sen. Ted Cruz has called on the feds to investigate and prosecute the mayor of Portland for allowing Antifa to commit the assaults.

To federal law enforcement: investigate & bring legal action against a Mayor who has, for political reasons, ordered his police officers to let citizens be attacked by domestic terrorists. https://t.co/5xyCDARICl https://t.co/c0Tf3SsKEf

“[T]he Mayor—should be held fully accountable. By DOJ. By civil litigators. By criminal prosecutors. AND by the media,” Cruz stated on Twitter.

Thank you for reporting on this sickening assault. Other journalists should do the same & those who facilitated or turned a blind eye to domestic terrorists—e.g., the Mayor—should be held fully accountable. By DOJ. By civil litigators. By criminal prosecutors. AND by the media. https://t.co/uqRRYEmhFe

Troubling, if true. Should “journalists” be inciting physical violence against those with whom they disagree? Calling for assaults with milkshakes apparently laced with quick-dry cement? Is that consistent with journalistic ethics or responsibility? Or the criminal code? https://t.co/A07icUZYGM

The New Jersey Department of Homeland Security officially listed Antifa as a terrorist organization back in 2017, following a spate of attacks in which Trump supporters were targeted.