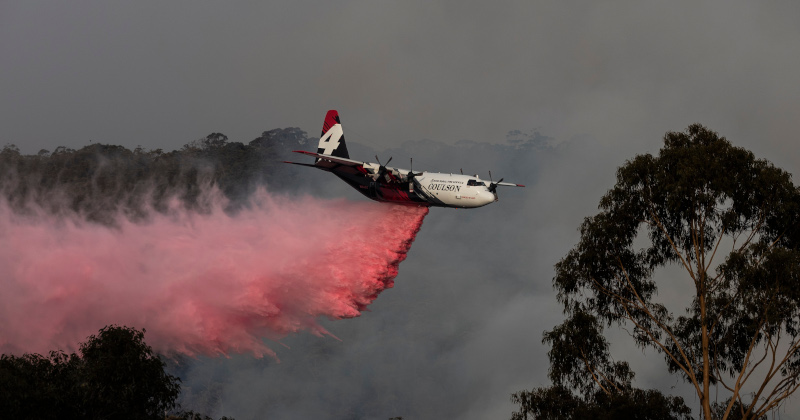 It was not immediately clear why the plane crashed while it was carrying a load of fire retardant.

“There appear to be no survivors as a result of the crash down in the Snowy Monaro area,” Rural Fire Service Commissioner Shane Fitzsimmons said. “It’s impacted heavily with the ground and initial reports are that there was a large fireball associated with the impact of the plane as it hit the ground.”

The Canadian-owned C130 Hercules air tanker was sent to assist put out a fire in a nearby national park.

“Unfortunately, all we’ve been able to do is locate the wreckage and the crash site and we have not been able to locate any survivors,” Fitzsimmons said, adding that all three victims were American residents and that they did not immediately know why the tanker crashed.

“There is no indication at this stage of what’s caused the accident,” Fitzsimmons said.

Geoffrey Dell, an expert in accident forensics at the Central Queensland University, said the aircraft may have been “aerodynamically overloaded” and turned or changed altitude too fast for its load, causing it to lose altitude at a rapid rate.

“It’s designed to operate to certain G (gravity)-limits, and if you go over those, different parts of the structure can be overstressed,” said Dell.

A spokesperson for Australia’s Civil Aviation Safety Authority said the tanker went into a valley to deliver the retardant and didn’t come out.

Peak View is close to an out-of-control fire in the Wadbilliga National Park, the fire service said.

Fitzsimmons said the aircraft had been leased by Canadian aerial firefighting company Coulson Aviation, which had another C130 Hercules working in the bushfires operation.

According to Fitzsimmons, Coulson had grounded its air tanker fleet following Thursday’s crash, as it awaits a review to find out whether there was no systemic issue such as a fuel problem.

“The accident is reported to be extensive and we are deeply saddened to confirm there were three fatalities,” Coulson said in an emailed statement, according to Reuters.

The Australian Transport Safety Bureau announced it was sending investigators to the crash scene to collect evidence and analyze available data. The investigation team is also expected to review weather information and interview any witnesses

The bureau said it would send out a preliminary report in about 30 days. Should a serious safety issue be identified during the probe it would immediately inform relevant stakeholders.

The crash came as bushfires also approached Canberra — Australia’s capital — forcing its airport to suspend commercial flights and give priority to fire-fighting planes.

“Arrivals and departures are affected due to aviation firefighting operations,” said the airport authority.

The capital territory’s emergency agency warned residents of three suburbs on Canberra’s eastern side to “seek shelter,” warning motorists that driving would be “extremely dangerous and potentially deadly.”

Across NSW firefighters are tackling a total of 101 bushfires while to the south in the neighboring state of Victoria there were 17 blazes on Thursday.

Australia’s Melbourne-based Bureau of Meteorology warned that despite recent rainfall, which brought reliefto some areas scorched since Christmas, “damaging winds” were again driving up the fire danger in some regions.

Australia’s tourism industry is facing major revenue losses and economists estimate the bushfire season monetary cost could be as high as A$5 billion (€3 billion).