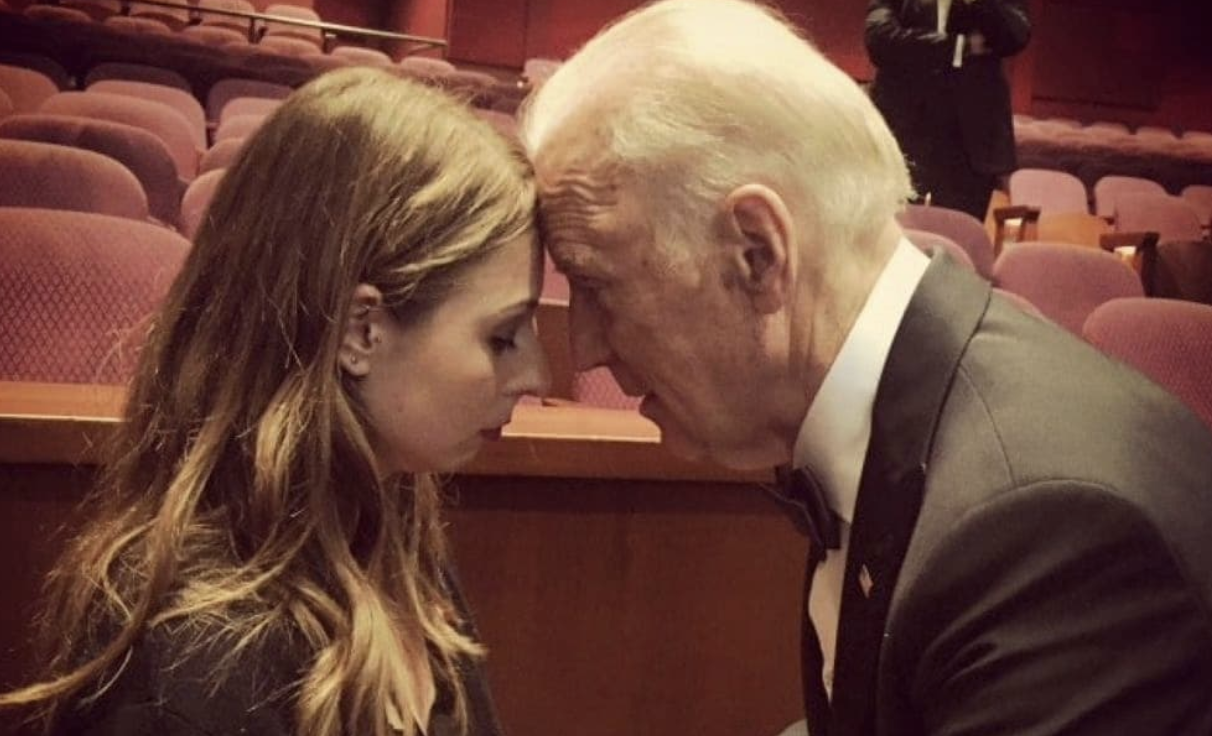 Mere hours after Joe Biden published a video where he vowed to be “more respectful” toward women after a controversy over his history of “inappropriate” physical contact with women exploded onto the front pages, three more women have come forward to the Washington Postto share their owns stories about their encounters with the former Veep, bringing the total number to seven.

All three women told WaPo that Biden’s unwillingness to apologize for his behavior in his grand mea culpa video had offended them, and said it had become clear that Biden was “struggling to understand” exactly why his actions were inappropriate. This isn’t about sexual assault, one woman said, it’s about power dynamics between men and women.

Vice President Biden with Sofie Karasek, one of three women who spoke with the Washington Post.

One woman described how Biden had touched his forehead to hers during a widely photographed moment that she said was “kind of inappropriate.”

Vail Kohnert-Yount said she was a White House intern in the spring of 2013 and one day tried to exit the basement of the West Wing when she was asked to step aside so Biden could enter. After she moved out of the way, she said, Biden approached her to introduce himself and shake her hand.

“He then put his hand on the back of my head and pressed his forehead to my forehead while he talked to me. I was so shocked that it was hard to focus on what he was saying. I remember he told me I was a ‘pretty girl,'” Kohnert-Yount said in a statement to The Post.

She described feeling uncomfortable and embarrassed that Biden had commented on her appearance in a professional setting, “even though it was intended as a compliment.”

“I do not consider my experience to have been sexual assault or harassment,” she stated, adding that she believes Biden’s intentions were good. “But it was the kind of inappropriate behavior that makes many women feel uncomfortable and unequal in the workplace.”

Another woman described meeting Biden when he introduced Lady Gaga at the Oscars in 2016. She was part of a group of sexual assault victims who appeared with the singer. When she met Biden after the ceremony, he once again did the forehead touching thing – one of his signature moves – in front of a bevy of cameras.

The most recent encounter described to The Post took place in 2016.

Sofie Karasek was part of a group of 51 sexual assault victims who appeared onstage at the Oscars with Lady Gaga that year; Biden had introduced the singer’s performance.

Karasek said as she met Biden after the ceremony, she was thinking about a college student who had been sexually assaulted and recently died by suicide. She decided to share the story with the then-vice president, and Biden responded by clasping her hands and leaning down to place his forehead against hers, a moment captured in a widely circulated photograph.

Karasek said she appreciated Biden’s support but also felt awkward and uncomfortable that his gesture had left their faces suddenly inches apart. She said she did not know how to respond to, as she described it, Biden crossing the boundary into her personal space at a sensitive moment.

Someone printed her the photo of that moment, which Karasek framed and put on a shelf, but later took it down as the #MeToo movement began drawing more attention to cases of sexual harassment, assault and unwanted touching.

The third woman was a Democratic staffer during the 2008 campaign. She met Biden at a reception for 50 people that she helped organize. She described how Biden delivered an unwanted hug that lasted “for a beat too long.”

Alex Jones breaks down how the crisis in Venezuela could trigger a world war as other nations choose sides in the country’s democratic dispute, and he shows how the socialist nightmare is connected to the complete collapse of the United States’ southern border as people flee north from South America.

She now runs a nonprofit that fights sexual harrassment and said she felt duty bound to speak up.

The third woman to speak with The Post recalled meeting Biden for the first time during the 2008 election cycle.

Ally Coll said she was a young Democratic staffer helping run a reception of about 50 people when Biden entered the room. She said she was then introduced to Biden, who she said leaned in, squeezed her shoulders and delivered a compliment about her smile, holding her “for a beat too long.”

Coll, who runs the Purple Campaign, a nonprofit group that fights sexual harassment, said she felt nervous and excited about meeting Biden at the time and shrugged off feelings of discomfort. She says now that she felt his alleged behavior was out of place and inappropriate in the context of a work situation.

“There’s been a lack of understanding about the way that power can turn something that might seem innocuous into something that can make somebody feel uncomfortable,” said Coll, who consults with companies about their workplace policies.

In Biden’s defense, one woman who spoke with WaPo said the touching foreheads maneuver was a common gesture Biden employs with men and women (probably to try and convey, in pictures, that he’s a genuine “tactile” politician).

But with Biden reportedly set to declare his candidacy before the end of the month, his campaign-in-waiting has been thrown into disarray, and his top advisors are searching for scapegoats in the crowded field of Democratic rivals vying for the 2020 nomination.

If this report makes one thing clear, it’s that this scandal isn’t going away. And before it’s over, Biden, who is also facing renewed backlash over his role in the Anita Hill hearings, when he led the Senate committee that interrogated her, might find support for his candidacy has significantly diminished.

However, he has had one unexpected defender throughout all of this: President Trump, who has said Biden shouldn’t apologize.

Maybe the president is working with Biden’s rivals, too?