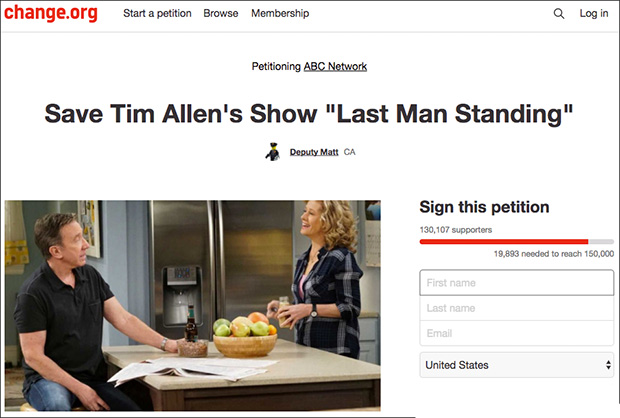 In a tweet sent out by the comic, Allen expressed bewilderment over the his treatment by the network he’d “called home for the last six years.”

Stunned and blindsided by the network I called home for the last six years. #lastmanstanding

ABC, according to Deadline Hollywood, blamed license fee issues as the reason behind the cancellation. The sudden announcement led many to suggest that the decision could have been political given the TV show’s overt conservative-leanings.

Deadline Hollywood writer Nellie Andreeva similarly noted confusion over the cancelling given “the fact that the blue-collar sitcom was ABC’s second most watched comedy this season with 8.1 million viewers…”

“It was the third most watched ABC scripted series overall behind Grey’s Anatomy and Modern Family,” Andreeva wrote.

“A large part of these jobs are managing failure, and we have made the tough calls and canceled shows that we would otherwise love to stay on the air. That’s the job. I canceled Last Man Standing for the same business and scheduling reasons that I canceled Dr. Ken, The Real O’Neals, The Catch and American Crime,” Dungey said. “Last Man Standing was a challenging one for me because it was a steady performer in the ratings, but once we made the decision not to continue with comedies on Fridays, that was where we landed.”

Allen has made numerous headlines in recent months for discussing the treatment of conservatives in liberal-dominated entertainment industry. In March during an appearance on Jimmy Kimmel Live!, the comedian jokingly made comparisons between Hollywood and “30s Germany.”

“I’m not kidding. You gotta be real careful around here. You get beat up if you don’t believe what everybody believes,” Allen said.

“This is like ‘30s Germany. I don’t know what happened. If you’re not part of the group, ‘You know what we believe is right,’ I go, ‘Well, I might have a problem with that.’”

In a previous interview with then-Fox News host Megyn Kelly, the sitcom star also alluded to Hollywood’s hypocrisy while discussing the recent election of President Trump.

“What I find odd in Hollywood is that they didn’t like Trump because he was a bully, but if you had any kind of inkling that you were for Trump you got bullied for doing that,” said Allen.

A petition hosted at Change.org, which calls on ABC to bring back the popular sitcom, has already gained nearly 130,000 signatures in less than a week.

Based on his recent Twitter comment, Allen seems just as confused over the show’s cancellation as its millions of fans.