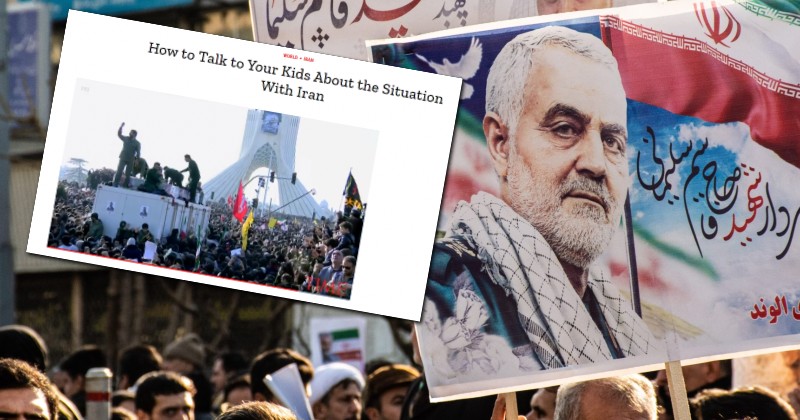 Time Magazine offered a handy guide on how parents can brainwash their kids on Iran by disputing the fact that Qasem Soleimani was a terrorist.

The guide, entitled ‘How to Talk to Your Kids About the Situation With Iran’, promises to “arm you with the information you need if you choose to bring up the topic or if kids ask questions about it.”

That “information” consists of watering down the fact that Soleimani had overseen atrocities that led to the deaths of thousands of Iraqi and Syrian citizens as well as the slaughter of over 600 U.S. troops.

U.S. military leaders gave Trump several choices for how to respond to Iran’s actions. Killing Soleimani was considered the most extreme. Some top U.S. military and government officials have expressed surprise and concern about Trump’s decision.

Note how Time says, “Trump has called Soleimani a terrorist,” to subtly dispute the fact he was a terrorist, despite Soleimani being sanctioned and designated as a terrorist supporter by the U.S. back in 2007, more than nine years before Trump took office.

Also note how the article reads not so much as a guide on how parents can talk to their kids, but as a propaganda piece directed at adult readers who Time thinks have the mental capacity of children.

“Here’s my own handy guide on how to talk to your kids about Time Magazine…,” comments the Moonbattery blog.

“Tell them it is run by moonbats, who will side with any enemy against their own country, including terrorist maniacs who want to kill them. Tell them that like the rest of the liberal media, it consists of pernicious spin and vicious lies.”