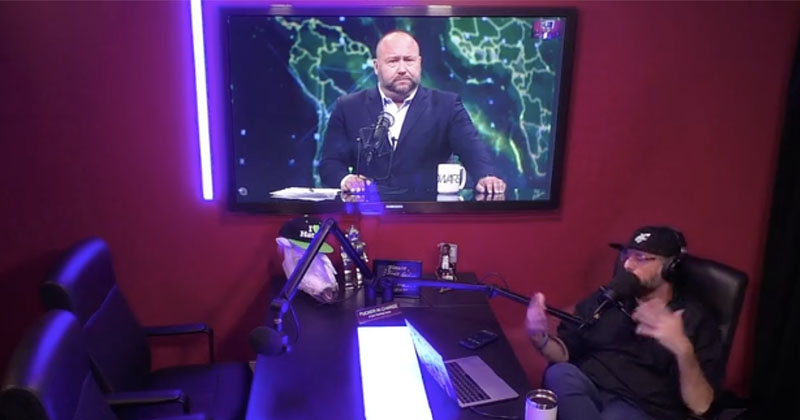 Alex Jones joined Sam Tripoli on Tin Foil Hat to break down Google banning the Infowars Official App amid the coronavirus pandemic for “misinformation,” as well as the globalists implementing a ChiCom-style panopticon control grid to monitor every citizen under the guise of tracking the coronavirus infection spread.

“The UN two years ago had a thing called ‘Disease X,’ a big giant PR hype, and they said, ‘within two years we believe a deadly virus – probably a coronavirus – will appear, probably out of China. And it’s going to kill 65 million people to 100 million people so you better accept world government and forced inoculations and give us billions of dollars at the UN or you’re all dead,'” Jones said Friday.

“And China became the communist model for the world government system, and they said ‘we’re gonna use cell phones to track you in live time to enforce social distancing, so you’re going to have to have apps that are government-approved on your phone so you can leave your house.'”

“So this is all the globalists using China as its authoritarian model,” Jones added.

Jones pointed out that the Democrats and mainstream media are moving in lockstep with China as its propaganda arm in demonizing President Trump’s response to the virus in hopes of crashing the economy.

“This whole thing is a giant UN global drill officially, with a real virus at the heart of it but exaggerated to create total, absolute massive panic to then accept martial law,” Jones said.

“Then all the Democrat blue cities come out full-force, and before Trump even does anything, they enforce martial law, they enforce total surveillance, they enforce all this unconstitutional stuff, but homeless people and criminals are all free, and then they say Trump isn’t doing enough, attempting to make him stampede into shutting down the economy which will then create a Great Depression, which will then nationalize the economy and then Trump will be blamed and removed from office.”

We get the government we deserve. As people worship Fauci, putting his picture on donuts, NIH did nothing to help with coronavirus but studied drunken monkeys & wasted money on other nonsense studies, his crony organization (WHO) has been thoroughly discredited and the CDC, a private organization, is given massive funding for surveillance in the “stimulus” bill.