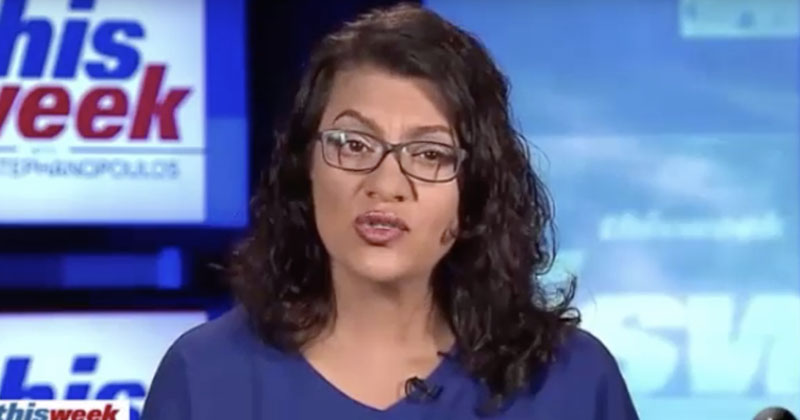 Far-left congresswoman Rashida Tlaib (D-Mich.) came out in defense of her colleague Alexandria Ocasio-Cortez (D-N.Y.) on Sunday, claiming that the migrant detention centers at the southern border are “absolutely” Nazi-style concentration camps.

When asked by ABC’s Martha Raddatz if she agreed with AOC’s absurd sentiment that the detention centers are “concentration camps,” Tlaib replied simply: “absolutely.”

“Absolutely. It’s traumatic,” Tlaib said. “I mean, I don’t know how to explain to people what we saw. When we’re explaining to us and looking back at us, that can’t be true. We’re all there. You have Congressman Castro, all of us were there. We saw what we saw.”

“Some of them haven’t seen their children since being there. What you need to know, the mere touch the mere, even me holding the hand, broke them down in tears. They’re under a lot of trauma. They’re in a facility that is dehumanizing. This is choice by the current administration. They’re choosing not allowing asylum to go through the legal procedure.”

AOC first made the insincere concentration camp remarks last week when she visited an Arizona border detention facility, where she accused Border Patrol agents without evidence of “sexually threatening her,” and forcing migrants to drink from toilets.

Her remarks sparked such an uproar that the CBP had to debunk her lie by releasing video of a border patrol agent giving a behind-the-scenes tour of the facility and drinking clean water from the sink unit attached to the toilets.

This is why House Speaker Nancy Pelosi slammed the far-left wing of her party on Sunday: for their over-the-top social justice advocacy that’s alienating moderate Democrats and independents.