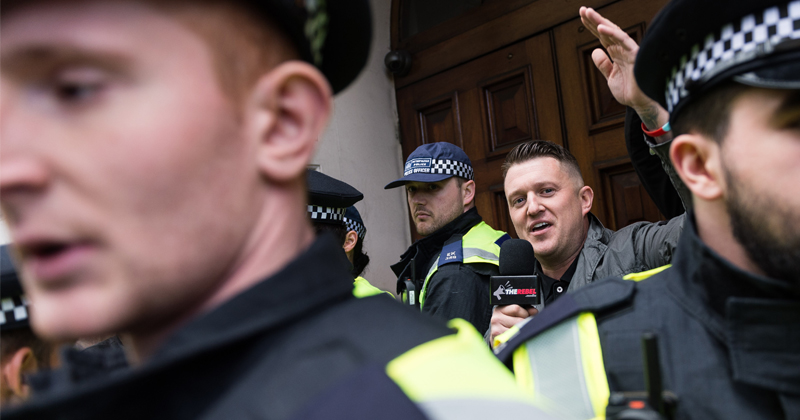 Tommy Robinson is still in jail after being arrested for reporting on the trial of an alleged Muslim child rape gang the government wanted to keep under wraps.

Robinson was already serving a suspended sentence (probation) due to a prior arrest by police, meaning that the journalist will likely serve 13 months in jail.

He was arrested outside the Leeds Crown Court where 10 men are on trial for offenses including child rape, trafficking and supplying drugs to children.

It’s difficult to get updates on Robinson’s status because the UK government has apparently placed a gag order on the accused rape gang trial and Robinson’s arrest.

“Articles about the arrest and subsequent imprisonment of independent journalist and activist Tommy Robinson are being rapidly scrubbed from the internet after the British government put restrictions in place banning any reporting on the matter,” reported Cassandra Fairbanks of the Gateway Pundit.

Robinson was trying to bring the trial to public attention in light of the government keeping it under wraps due to recent accusations against UK police for not doing enough to stop the Muslim rape gangs.

“Telford Member of Parliament Lucy Allan has taken police to task for ignoring large-scale child sexual exploitation by mostly Muslim grooming gangs, with abusers only having to say they did not know the victim’s age to escape justice,” Breitbart reported. “Despite the age of consent across the United Kingdom being 16, men abusing significantly younger children were able to get the police off their backs simply by claiming the victims consented and that they did not know they were underage.”

Robinson’s arrest comes only a few weeks after he and other immigration activists held a “Day of Freedom” rally in defense of free speech, which the UK media unsuccessfully tried to smear as a “far-right rally.”

According to Andrew Doyle of Spiked Online:

‘Thousands of far-right protesters march in London in support of “free speech”’, said the Guardian. Admittedly, the headline was later amended – by Tuesday it read ‘Thousands march in “free speech” protest led by right-wing figures’ – but this instinct to smear an entire crowd on the basis of a minority contingent is telling. It is precisely the kind of disingenuous tactic that has bolstered Robinson’s appeal. Free speech is now routinely weaponised for partisan ends, and misrepresentation in the media is a major contributory factor.

In other words, the fact that the media, which used to be the bulwark of press freedom, is now falsely claiming free speech activism is exclusive to the so-called “far right” reveals there’s an establishment-led war against free speech that’s expanding worldwide.