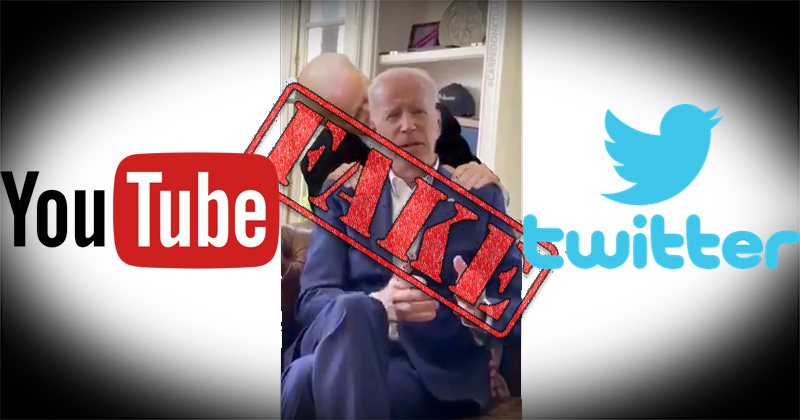 Two of the world’s largest internet platforms have recently announced plans to ban “manipulated” photos and videos, specifically if they are related to the 2020 election.

On Monday, YouTube revealed a new policy in which the company will delete “manipulated or doctored” videos concerning the election.

The Google-owned video platform desires to be a “more reliable source” for news and claims to be pursuing a more “healthy political discourse.”

Just days later, Twitter released a video advertisement “introducing a new rule and a label that will address this and give people more context around” tweets containing “manipulated photos or videos that can cause people harm.”

“If a video in your timeline has been altered, it will be labeled as ‘Manipulated media,'” the ad says while showing a blurred out video of President Trump speaking.

Twitter then instructs users to “tap the label to view info from reputable sources,” so mainstream media links explaining how the clip was “altered” can be found.

We know that some Tweets include manipulated photos or videos that can cause people harm. Today we’re introducing a new rule and a label that will address this and give people more context around these Tweets pic.twitter.com/P1ThCsirZ4

Our new rule: You may not deceptively share synthetic or manipulated media that are likely to cause harm. In addition, we may label Tweets containing synthetic and manipulated media to help people understand their authenticity and to provide context. https://t.co/VN8uGyVJgq

However, throughout the past few years, Americans have seen videos that are blatantly edited or altered to mock or point out logical fallacies of Democrats get labeled “fake” and “doctored.”

For example, President Trump retweeted a meme by Carpe Donktum in April of 2019 showing Joe Biden creepily sniffing himself and the mainstream media freaked out and claimed it was “doctored.”

In November of 2018, MSM also claimed footage of CNN reporter Jim Acosta “karate-chopping” a reporter was “doctored” after President Trump retweeted a video by Infowars’ Paul Joseph Watson, which was simply a zoomed-in version of the original.

Get Watson’s take on the scandal below:

Then, in November of 2019, media outlets such as The Washington Post made sure American voters were aware an image President Trump tweeted showing his head attached to the body of fictional boxer Rocky Balboa was “doctored” and not a real photo.

Without The Washington Post, would you have been able to conclude the image below was “doctored?”

Providing a perfect example of content that will likely be deemed “doctored” by social media giants, content creator “SOMETHiNG WiCKËd” released a video Tuesday mocking Democrat candidate Mike Bloomberg for being short.

Clearly the footage has been “doctored” or “faked” to provide comedic relief to those who oppose the billionaire presidential hopeful.

With Twitter and YouTube recently ramping up their anti-free speech agenda, internet users can count on MemeWorld.com to provide the side-splitting memes they will undoubtedly crave.

Is this manipulated media? pic.twitter.com/sUPDb4d1qF

I wondered why my meme that I posted today was marked as 'sensitive content'. This is so harmful to the fragile snowflakes who might get triggered.pic.twitter.com/DdzqMmAipM

The image below is 100% unaltered and has been deemed authentic by the appropriate authority. Thank you. pic.twitter.com/koUQyu8NDK