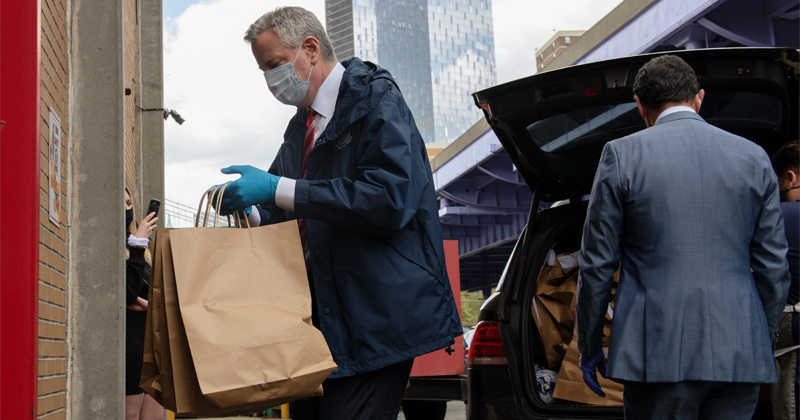 As public opinion coalesces around the view that at least some police reforms are needed, radical leftists and their allies in the press are capitalizing on the surge in public resentment toward the police to push a radical agenda Meanwhile, President Trump effectively plays right into their hands by doubling down on his attacks on demonstrators (demonstrators who even Trump has at times defended).

We’ve tried to highlight examples of this as the Minneapolis City Council “committed” on Sunday to dismantling the city’s police department and building a new “public safety” department in its place, while NYC Mayor Bill de Blasio and “mayor in waiting” Comptroller Scott Stringer have called for siphoning more than $1 billion in funding from the NYPD and shifting it to social and youth services. When the protest movement started, it was a backlash against police brutality, a problem that has plagued the public for decades, and has been increasingly spotlighted in the age of cellphone video cameras that have ushered in a new age of accountability.

Police Unions and entrenched interests have continued to reflexively resist reform (after all, that’s what public employee unions are designed to do, unless the “reform” somehow lessens their memberships responsibilities or increases their compensation); meanwhile, radical leftists have pushed to move the goalposts, calling for the all-out abolition of police. 10 years ago, this would be unimaginable. Yet, here we are.

Anybody with an ounce of common sense can probably imagine some less-than-desirable consequences to abolishing police departments. But in a sign of just how removed the far-left truly is from the perspective of the ordinary American moderate, consider this: Alison Hirsh,, a senior advisor to NYC Mayor Bill de Blasio, just left his office in protest over his treatment of the NYPD.

Hirsh wasn’t fired for criticizing her boss; instead, she’s being transferred to another city department and will retain her cushy $200k+ salary and generous city benefits (including a taxpayer funded pension).

According to Politico, Hirsh was “offended” by de Blasio’s “defense” of the police when he warned peaceful demonstrators to disperse during one of the early protests, claiming that “your point has been made.”

Hirsh did not address de Blasio’s management of the protests in her statement, but those familiar with her decision said she had repeatedly challenged the NYPD’s tactics during staff meetings and calls with the mayor and Police Commissioner Dermot Shea. She witnessed what she considered unnecessary force while monitoring a march in Brooklyn on May 30, when police shoved demonstrators and used pepper spray to subdue them, the sources said.

The mayor was unmoved by the account — and many others caught on video, which he often says he has not seen. Later that same night he defended the NYPD, including officers who drove a police car into a crowd of protesters who were tossing water bottles and traffic cones at the vehicle.

“Anyone who is a peaceful protester, it’s time to go home. The point’s been made,” he said during an impromptu interview on NY1 late that evening. He also said those particular officers “were trying to deal with an absolutely impossible situation” and blamed demonstrators for surrounding their car.

Hirsh — and many other past and present de Blasio staffers — were outraged by such a strong defense of police from a mayor who ran on a platform of reforming the NYPD and ending aggressive tactics toward black and Latino New Yorkers. In her Twitter bio, Hirsh describes herself as “anti-racist” and prior to joining the administration she was political director at the building service workers union that represents many low-income, black and Latino workers.

It’s just another example of how the radical left sees reality through a very, very different lens than both moderate Democrats, and conservatives alike.