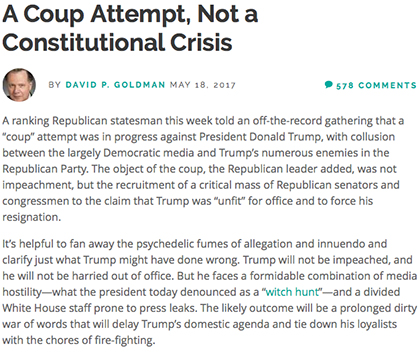 An attempt to force Donald Trump to resign from office is being led by GOP establishment insiders in concert with the Democratic-aligned media, according to a top Republican.

Author, journalist and Middle East Forum fellow David P. Goldman reveals that the unnamed ranking Republican told an off the record gathering this week that, “A “coup” attempt was in progress against President Donald Trump, with collusion between the largely Democratic media and Trump’s numerous enemies in the Republican Party.” 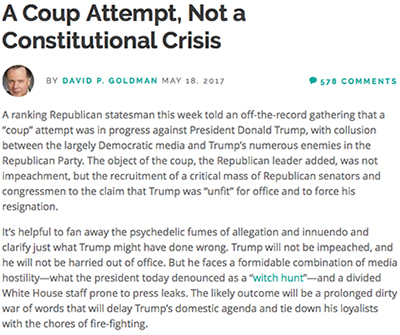 “The object of the coup, the Republican leader added, was not impeachment, but the recruitment of a critical mass of Republican senators and congressmen to the claim that Trump was “unfit” for office and to force his resignation,” writes Goldman.

Although it is unlikely that Trump will be impeached and virtually impossible that he will ever resign from office, the goal is to keep his administration mired in scandal so that Trump cannot advance his policy agenda.

This fits with our previous reporting, which exposed how individuals within Trump’s inner circle are already preparing to become the face of the effort to remove him from office.

The “coup” attempt is being organized by the usual suspects – John McCain, Lindsey Graham and Paul Ryan.

“Our first allegiance is to our country,” he said on Fox News. “Our country itself is under attack from within.”

And the “politicization” of intentionally non-partisan agencies, which began under the Obama administration, has lead to the constant deluge of leaks to the press who sequentially spin the story to further damage President Trump.

“This is truly deep state,” said Shaffer. “This is something being done by those in the deep state to upset everything that’s going on and try to undermine the president in every breath.”

Even CNN’s Dana Bash admitted the deep state is trying to torpedo Trump, particularly with the release of the “Comey memos” being used to claim Trump tried to “obstruct justice” during the FBI investigation into former national security advisor Michael Flynn.

The New York Times claimed that in one memo from February (despite never having read it), Trump told former FBI Director James Comey, “I hope you can see your way clear to letting this go, to letting Flynn go, he is a good guy. I hope you can let this go.”

However, Comey later told the Senate on May 3 that he was never asked to stop an investigation due to “political reasons,” which indicates either the New York Times report is false or the former FBI director just committed perjury.

During the Senate testimony, Comey confirmed to Sen. Mazie Hirono (D-Hawaii) that in theory, the Attorney General or senior officials at the Department of Justice could stop a FBI investigation.

The former FBI director added it would “be a big deal to tell the FBI to stop doing something that – without an appropriate purpose.”

“But I’m talking about a situation where we were told to stop something for a political reason, that would be a very big deal. It’s not happened in my experience.” 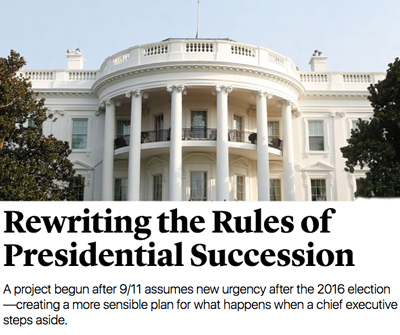 The deep state has also been promoting the idea of a coup against Trump in globalist-oriented magazines like The Atlantic and The New Yorker.

In a March 28 article from The Atlantic, Norm Ornstein claimed the “continuity of government” (COG) mechanism developed during the Cold War could be used to overthrow the Trump administration.

“…If the election had been stolen, Pence’s place as president would be no more legitimate than that of Trump,” he wrote. “After Pence — Paul Ryan, the speaker, followed by Orrin Hatch, the president pro tem, followed by Secretary of State Rex Tillerson.”

Ornstein wants Congress to establish procedures for a “special election” for president and vice president to ensure the “continuity of government” amid “cyberwarfare” by “Russian hackers,” which would actually guarantee the continuity of the deep state and its control over government.

While some on the left continue to insist that the “deep state” itself is a “conspiracy theory,” the notion of a coup d’état is being seriously discussed by the likes of CNBC’s Jake Novak, who writes that this week’s Russia-Trump intelligence “leak” was part of the scheme, and that the leaks were possibly coming from “someone close to President Trump himself is essentially acting like a mole in the White House.”

Even CNBC has headlines like this, but some libtards are still claiming the "deep state" is a conspiracy theory.

“The really alarming news is that the duly-elected President of the United States appears to be the target of a political coup,” writes Novak, adding that Trump has not committed any single impeachable offense but, “The bottom line is that we have some very powerful people in Washington who really don’t like how democracy played out this time around and what they do to attack it next isn’t going to be any better than what they’re doing now.”