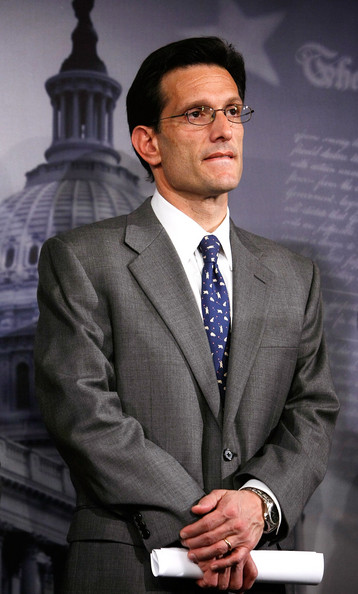 House GOP Leader and the second-ranking House Republican Eric Cantor has come down heavy on the OWS movement encamped outside of Wall Street and around the country.

Cantor said in a speech at the Values Voters Summit in Washington that he is “increasingly concerned” about the “growing mobs” at the protests.

“I, for one, am increasingly concerned about the growing mobs occupying Wall Street and the other cities across the country,” Cantor said. “Believe it or not, some in this town have actually condoned the pitting of Americans against Americans.”

Actually most of the OWS folks are pitted against one of Cantor’s top five contributors – Goldman Sachs. Bank of America, large insurance companies and financial firms have also donated money to the establishment politico.

Obama also took a lot of dough from Goldman Sachs, demonstrating that the bankers are non-partisan. The Obama administration is practically a branch office of Goldman Sachs.

Cantor’s tirade came a day after another establishment Republican criticized the movement. Herman Cain said in Houston yesterday that the OWS is “trying to disrupt the whole country.”

Cain’s confrontational attitude should be expected since he is a former deputy chairman and chairman of the board of directors of the Federal Reserve Bank of Kansas City.

Rep. Paul Broun, who is characterized as a Tea Party Republican – in other words, he is a member of the sanitized and Borg hive Tea Party (insert trademark) – told ABC the protests amount to an “attack upon freedom.” Said Broun: “They don’t know why they’re there. They’re just mad. This attack upon business, attack upon industry, attack upon freedom – and I think that’s what this is all about.”

In predictable right-vs-left fashion, Broun placed blame for the bankster engineered economic crisis on Obama and the Democrats. He said they are “killing our economy, they’re killing jobs, they’re running them over offshore. We need to change all that. If we don’t, this economy is going to have a bigger crash than we did in the Great Depression.”

Rep. Paul Broun denounces OWS at 6:25 into this interview.

Broun is only half right. In fact, working as a globalist tag team, both sides of the establishment one party system working for the banks and large transnational corporations are responsible for killing the United States, taxing it to death, smothering it with federal laws and regulations, and forcing the people to live under the bankster Federal Reserve system that engineers booms and busts and inflates the money supply.

As fallacious as Democrats are, they at least pretend to be sympathetic to the OWS while continuing to work for international bankers.

Democrat friendly labor unions and community groups that owe their existence to the Ford Foundation and a constellation of “progressive” foundations are now marching in league with at least some of the OWS demonstrators, who continue to be characterized by the corporate media as politically amorphous and adrift despite their placards and chants calling for a day of reckoning on Wall Street and, increasingly, over at the Federal Reserve.