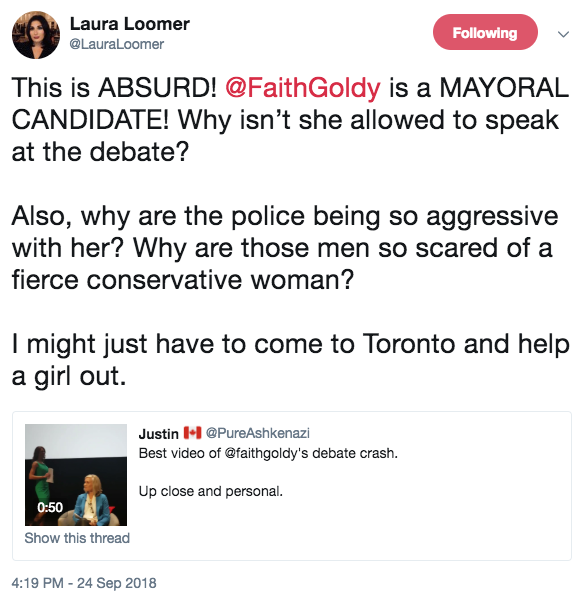 Toronto mayoral candidate Faith Goldy was grabbed by police and dragged off a debate stage after she stormed the event asking why she hadn’t received an invitation.

On Monday the ArtsVote organization held the first mayoral arts debate hosting five candidates, but excluded Goldy despite her having the third highest poll numbers in the race.

At the start of the debate, Goldy took to the stage in a stunning green dress explaining she had a petition signed by 5,000 people demanding she be allowed to participate in the event.

“Good morning. Sorry I must have missed my invitation in the mail. My name’s Faith Goldy,” the candidate said, as she took the stage highlighting she had higher poll numbers than several of the participants.

WATCH: Mayoral candidate Faith Goldy just interrupted the first debate of the campaign. She was removed by security. #TOpoli pic.twitter.com/2mrcxu3BFL

“I’m so sorry we cannot let you disrupt this arts debate,” the moderator told Goldy. “This is the first debate for our city, and if you care about our city you will allow our candidates to actually talk,” the moderator added without a hint of irony.

Video of Goldy’s grand gesture went viral on social media, where she was praised for exposing the liberal establishment’s attempt to mastermind the election process. 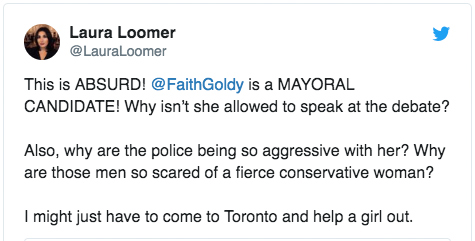 The look on their faces says it all. pic.twitter.com/kX7ZLRB5uk

CBC News reports ArtsVote chose not to invite Goldy because she hadn’t submitted the proper paperwork.

“A spokesperson for ArtsVote told CBC News that all mayoral candidates were invited to fill out a survey ahead of the event,” CBC reported Monday. “Goldy did not, and was not considered to be part of the debate as a result. Goldy was not invited to the debate, the spokesperson added, and had bought her own ticket in order to attend.”

Goldy responded that she had never been sent the survey and never received an invitation.

They hate the people’s choice for Mayor & are taking orders from Tory! pic.twitter.com/4evn5GRP8Y

“Fake news! I was never invited to today’s debate — no note to my personal or campaign accounts; no forms filled on our site, no msgs on personal or campaign phone. Same with tomorrow’s debate & Wednesday’s! They hate the people’s choice for Mayor & are taking orders from [Toronto Mayor John] Tory!”

Later the media claimed Goldy wasn’t invited because she didn’t have an “arts” platform listed on her website.

Ps: If media actually did their job, they’d know Tory posted on Thursday and Keesmaat did so *the day before the debate*.

Translation: Both had zero arts policies articulated at the time of invitation. Meantime, the other 3 still have zilch on their sites.

Goldy on Monday also highlighted a smear attempt from earlier in the month from Tory, in which he claimed he’d debate any candidate “who does not have a history of spreading hate speech or bigotry.”

This is not an argument.

It’s a passive aggressive smear by a weak leader who is afraid of debating a girl.

Jellyfish John is unleashing his paid intimidators because he’s got all the money in the world but lacks a backbone.

“This is not an argument,” Goldy wrote on Twitter. “It’s a passive aggressive smear by a weak leader who is afraid of debating a girl. Jellyfish John is unleashing his paid intimidators because he’s got all the money in the world but lacks a backbone. Tory is afraid of Goldy. Period.”

John Tory is terrified to debate me.That's why I'm banned from Mayoral debates, despite consistently polling in the top 3!

The Left seeks to crush anything it cannot control.

Goldy, an outspoken Pro-Trump, anti-political correctness border control advocate, joined the race in July along with a slew of other potentials.