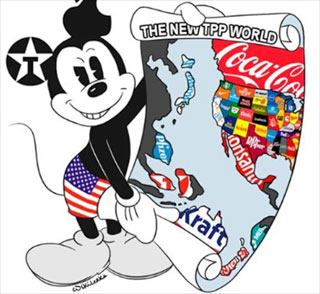 The corporatists have agreed on the details of the Trans-Pacific Partnership.

If ultimately approved by Congress — and this is less than certain — the TPP will expand the North American Free Trade Agreement into Japan, Australia, Chile, Peru and several southeast Asian nations.

Obama is a keen advocate of the “free trade” deal, but has faced staunch opposition from the left side of his party, notably trade unions and environmentalists.

Republican presidential candidates, including frontrunner Donald Trump, also oppose the deal and passage by Congress is less than certain.

Only a handful of Democrats support Mr. Obama’s trade policy, and Republican support is unpredictable in the 2016 election year, depending on the stance of presidential candidates and new leadership in the House. As it is, the deal can’t go to a vote before Congress until early next year.

The odds of passage in Congress will hinge in large part on the final language in a number of provisions, ranging from the strengthening of rights for labor unions to whether U.S. cigarette companies will face special limitations within TPP countries.

If passed the deal will allow corporate tribunals to overrule Congress and violate the national sovereignty of the United States. The process will be authoritarian and not have an appeal process or exit provisions.

“Packaged as a gift to the American people that will renew industry and make us more competitive, the Trans-Pacific Partnership is a Trojan horse,” Zero Hedge noted on Monday. “It’s a coup by multinational corporations who want global subservience to their agenda. Buyer beware. Citizens beware.”

If enacted the TPP will ultimately reduce America to third world status.

The global elite and their corporatist partners are determined to impoverish humanity, consolidate wealth and power and reinvent and modernize the feudal system of the Middle Ages.

TPP is their weapon of choice.