Transcendence (2014), a film slated for theatrical release on April 18th for audiences nationwide portrays Johnny Depp as Dr. Will Caster, a terminally ill scientist who downloads his mind into a computer. This grants him power beyond his wildest dreams, and soon he becomes unstoppable. And while much of this plot sounds similar to the plot of Lawnmower Man from the 90s, the story line has received a bump from the technology of the past 20 years since that seminal film.

According to the trailer for the film, the protagonist, whose name appears to be some kind of transhumanist sick joke (“Will Caster”: one who “casts his will” on humanity?) an avid transhumanist in the vein of Ray Kurzweil is shot by an anti-transhumanist activist from a “radical anti-tech group” known as “RIFT”. The bullet appears to be laced with radiation. This causes Dr Caster’s wife to accelerate the doctor’s transhumanist program to save his life. In their haste, this of course causes them to presumably not put in place the safeguards necessary to keep the new AI from destroying the world. The new AI created from Dr. Caster’s consciousness goes on a rampage killing everything and everyone it can. 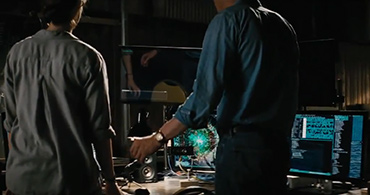 While this film appears to take a cautious look at transhumanism by placing it in a cautionary tale, this is yet another Illuminati attempt at preparing the masses for their program. We are 31 years away from a complete transhumanist utopia after all, according to some of the transhumanists, so a preparation for we the masses is definitely in order.

While this cautionary film should frighten us, especially considering the actual possibility that the Illuminati are actually bringing about a transhumanist world much like a Philip K. Dick film, some of the commenters on the trailers YouTube page see it quite benignly.

As one commenter put it,

“There is very little Google could be doing to accelerate it’s AI development project that it isn’t already doing. Good luck taking them out. The singularity is the only hope our race has with the threat of resource exhaustion, global warming, overpopulation, and nuclear war looming. Transhumanism makes possible a state of immortal existence beyond the pitiful imaginings of any of the major human religions. Do not be afraid.” – Adam Wander

If the film does not give you pause, perhaps the mindset of these commenters should. They appear to believe in transhumanism, even though they will most likely be denied the life extension technology.

We should have pause. As Katherine Albrecht puts it, we are building the body of the beast: