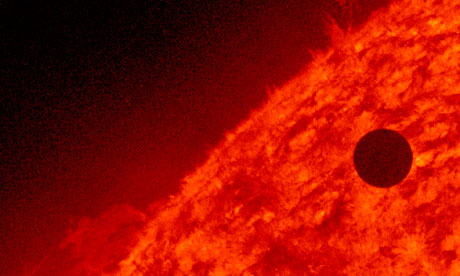 The 2012 transit of Venus, when the planet Venus will appear as a small, dark disk moving across the face of the Sun, began at 22:09 UTC on 5 June 2012, and will finish at 04:49 UTC on 6 June.[1] Depending on the position of the observer, the exact times can vary by up to ±7 minutes. Transits of Venus are among the rarest of predictable celestial phenomena and occur in pairs eight years apart:[2] the previous transit having been in June 2004, the next pair of transits will not occur until December 2117 and December 2125.

From the London Guardian:

One reason that observations of the 18th century transits came out so well was that a French astronomer, Joseph-Nicolas Delisle, produced a map of where the transit could be viewed. The map enabled astronomers to make a plan. It gave the expeditions an organizing principle.

It turned out that the phenomenon would be entirely invisible to people living in certain areas; if the sun is not up where you live at the time of the transit, you won’t catch it. >>>Read full article