C-Span has blocked viewers from chatting on its YouTube livestream of the public impeachment hearings, a move which crystallizes the age-old complaint that Americans don’t have much voice in their government: 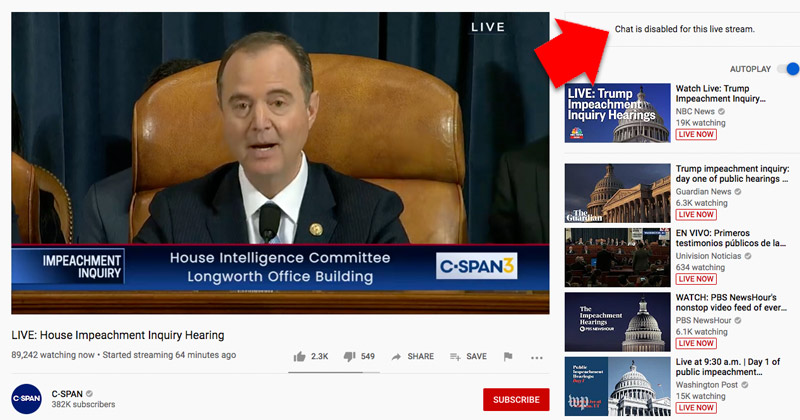 While the move was ostensibly intended to stop trolls, that’s what moderators are for, and frankly speaking something as big as the attempted removal of a US president who was duly-elected by millions of Americans should be in public discourse.

By being blocked from chatting about the ongoing impeachment process, Americans are now mere spectators of their government instead of active participants, something that would probably make Edward Bernays proud, but not the Founding Fathers who drafted the impeachment process.

Case in point, Facebook has been banning people for stating the name of the alleged “whistleblower” even though, per federal law, only the intel inspector general is required to not reveal who he is.

“The conscious and intelligent manipulation of the organized habits and opinions of the masses is an important element in democratic society,” Bernays believed. “Those who manipulate this unseen mechanism of society constitute an invisible government which is the true ruling power of our country.”

“…We are governed, our minds are molded, our tastes formed, our ideas suggested, largely by men we have never heard of.”

Matt Bracken breaks down the whistleblower Eric Ciaramella as the key to understanding the coup against Trump.
The Black Friday sales have arrived early! Get up to 70% off our hottest products as well as free-shipping and double Patriot Points while the sale lasts!