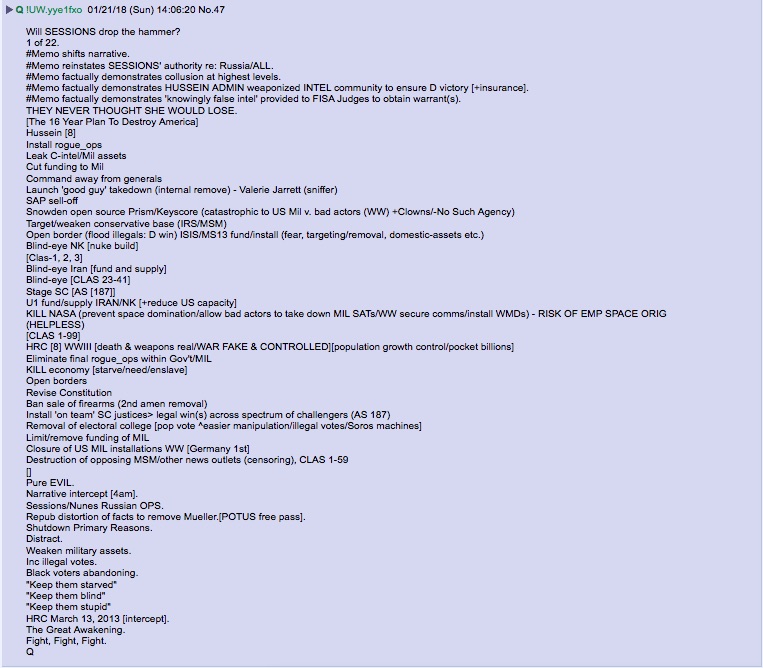 WASHINGTON, D.C. – In an explosive post on Sunday, QAnon explained the Barack Obama/Hillary Clinton 16-year treasonous plan to use two White House terms for a coup d’état in the United States that would end up revising the Constitution, cancelling the Second Amendment, and opening borders to flood the nation with illegal immigrants calculated to vote Democrat for the foreseeable future. 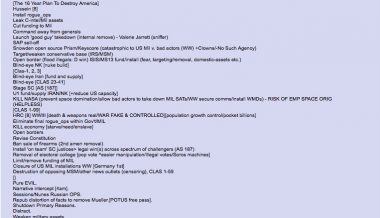 The following are key parts of the DECODE with regard to the importance of the “Nunes Memo” the House Intelligence Committee is expected to release this week:

Decode: The Nunes Memo made public will alert the American people to the Democratic Party coup d’état (undertaken in large part through Obama/Hillary/Podesta collusion with Russia).

Obama, Hillary Clinton, and Podesta (plus many others) are guilty of TREASON.  Hillary was right (Hillary’s tantrum after NBC commander-in-chief forum in September 2016 – “If we lose the election, we will all hang”).

Decode: The Nunes Memo when made public will prove the Obama administration weaponized the intelligence community to ensure the Democrats would win the 2016 presidential election.

Also included was President Obama’s plan to unmask and leak information detrimental to Trump’s campaign that was gained from the illegally obtained FISA electronic surveillance.

After McCabe communicates the Lisa Page “insurance” idea to Loretta Lynch, the HRC conspiracy develops as a pyramid structure, with Obama at the top calling the shots needed to use the Fusion GPS Dossier to get FISA court-ordered approval to conduct electronic surveillance on Donald Trump and principals in Trump campaign.  Other two legs of pyramid connect to the Clinton campaign through John Podesta and to the intel community via Clapper and Brennan.

CIA Director John Brennan – the CIA “handler” of Barry Soetoro, aka Soebarkah, aka Barack Hussein Obama – led the effort to sell the “Russia collusion” narrative to the mainstream media and the American public in order to prevent Donald Trump from serving out his term in office should he (unexpectedly) win the election.

The only military commanders promoted by the Obama and planned Hillary Clinton administrations were to be those who: accepted the LGBT agenda and sex-change operations for transgender soldiers at taxpayer expense, were willing to eliminate any discussion of radical Muslims as terrorists, accepted a nuclear-armed Iran and North Korea, were willing to advance the Palestinian agenda to destroy Israel as a Jewish state, were willing to promote Muslim Brotherhood control throughout the Middle East and Africa.

QAnon predicted that Hillary would use her 8 years as president to cause World War III – a war that would cause death and destruction on a massive, never-before-imagined scale of horror.

The war would be a “fake war” promoted by the government-controlled MSM. Billions of the world’s populations would be killed off, allowing the globalists (including Hillary, Obama, Podesta, and their co-conspirator minions) to pocket huge wealth on a global scale.

When the Obama/Hillary 16 years in the presidency were completed, the U.S. middle class would be destroyed.  The U.S. population (what was left of it) would be reduced to a status of enslavement, starvation, death, and disease.

When the Obama/Hillary 16 years in the presidency were completed, the U.S. would have no borders, the Constitution would be revised to remove the Bill of Rights and all fundamental U.S. freedoms, and the population would be disarmed by the repeal of the Second Amendment.

When the Obama/Hillary 16 years in the presidency were completed, there would be no electoral college.

Future presidents would be elected by a majority of the popular vote, giving control to large states like California, New York, and New Jersey that can easily be overrun with illegal immigrants voting for the traitors and their anti-American conspiracy.

If illegal votes were not enough to make sure the Democratic Party traitors dominated all elections, George Soros would be allowed to install voting machines to make Democratic Party voter fraud easy to achieve electronically.

When the Obama/Hillary 16 years in the presidency were completed, the U.S. military would comprise a very small percentage of the U.S. budget, with transfer payments making sure excessive taxation redistributed income to minorities and illegals sure to vote for the Democratic Party traitors.

U.S. military bases would be closed worldwide, beginning in Germany.  Russia, China, and rogue states including Iran and North Korea would no longer need fear U.S. military reprisals for their evil expansion.

Only “Project Mockingbird” PRAVDA-like mainstream media willing to be controlled by the CIA to disseminate the Obama/Hillary traitors’ anti-American ideology would be allowed to survive.

All other news would be censored, with Google, Facebook, Twitter, and other Internet giants unleashed to eliminate from “Social Media” even the most private or coded communications patriots might attempt.

Barack Obama, the Clintons, and their “Deep State” Democratic Party co-conspirators are “pure evil,” capable of nuclear war to achieve their globalist goals.