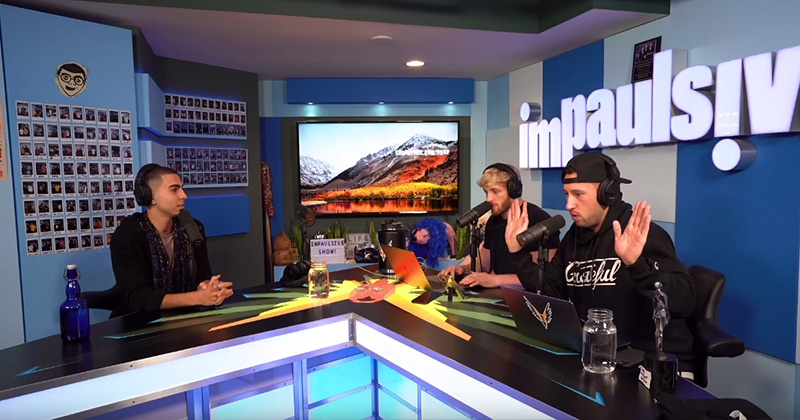 During Logan Paul’s Impaulsive podcast on Thursday, the popular YouTuber decided to trash Infowars’ Kaitlin Bennett before deleting his interview with her from his YouTube channel.

Paul began by saying Bennett has been “going viral” over the past few weeks for “hassling people and people handling her appropriately. The way she probably deserves to be handled for her antics.”

He then claimed Kaitlin goes out “looking for trouble” and that most social media users don’t like her because they’re predominantly liberal.

“I don’t even think most conservatives like her,” said Paul’s co-host Mike Majlak, who was brought in to prevent him from doing controversial things like attending a flat-earth conference.

Next, Majlak admitted to “going down a hole” of Bennett videos for an hour the previous night.

Paul and his co-hosts then played an out-of-context clip of Kaitlin arguing with a police officer and declared the cop to be a “fuckin hero.”

Majlak then claimed Kaitlin’s support for law enforcement is somehow fictional because of the out-of-context video and that she is the one who handpicks crazy liberals for her videos.

Anyone who has watched enough Infowars livestreams knows there is no need to cherry-pick footage to show the world videos of loony leftists.

“It’s painful and it hurts me to watch,” Majlak confessed.

“I don’t know how she goes out in public safely,” Paul ignorantly stated, adding, “probably because she’s always got a camera on her, she’s probably carrying.”

Paul, who has been the center of controversy in the past, said he tried to give her the benefit of the doubt, but that he can’t because she “showed zero signs of change of improvement.”

Essentially, he’s triggered that Bennett refuses to bow to the political and social engineers who are “canceling” her with Paul’s assistance.

Majlak stepped in again to predict Bennett’s reaction to their deletion of her interview, saying she’d likely say they’re offended by her views.

He then went on a tirade about how Bennet’s not civil, “she’s antagonizing gay and lesbians, she’s going to Bernie Sanders crowds and getting kicked out and starting fucking problems at the rally.”

Continuing, Majlak alleged nobody thinks Kaitlin is driving better discourse in America and that “the only people that side with her are the very, very fringe right.”

This is simply a poor attempt by establishment ass-kissers to publicly shame Bennett so young Americans are reluctant to view her content out of fear of being negatively judged by their conformist peers.

Will Paul suddenly feel “ashamed” of interviewing Infowars’ Alex Jones and delete that episode too?