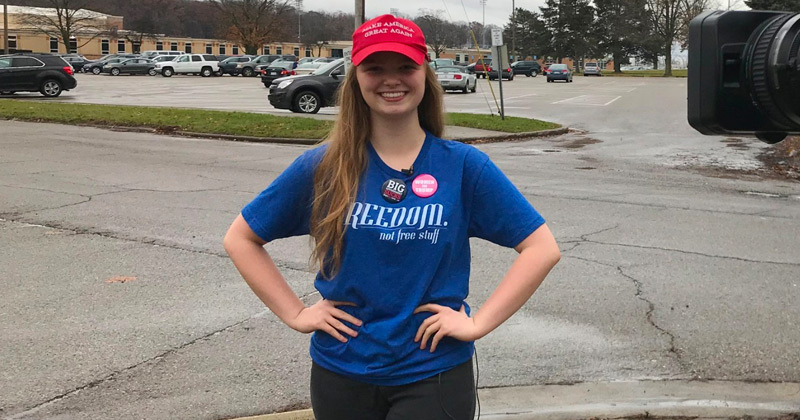 A student at a Michigan high school filed a police report after her teacher forcefully removed her “Women for Trump” pin.

Mason High School junior Sadie Earegood says the unnamed teacher assaulted her when he was triggered by the pin on December 5.

“I was just really shocked that a teacher would especially would do that,” Earewood told local Fox affiliate WSYM. “He’s talking about the Women for Trump pin and I said, that’s fine you don’t have to like it, we can have our opinions.”

At that point, Earegood says she began to resist the educator’s attempts to pull the pin off her shirt, before he was able to remove it.

“He grabbed it and I pulled and I tried to push his hand away and he grabbed my shoulder, just kind of put his hand there, and then he started pulling more and more and I just started backing up,” Earegood described.

The teacher then positioned the “Women for Trump” pin upside down and told Earegood it was the way it should be worn.

“I made a criminal assault and larceny report against the teacher,” Sadie’s mom confirmed. “He had no right to put his hands on my child over a pin or anything else. The first amendment gives everyone the right to express their freedom of speech. No one should get that upset about someone wearing a political pin.”

Police issued a statement claiming they’re still investigating the incident, saying, “Once we have a complete understanding of the situation, we will take appropriate action.”

Sadie says despite the teacher’s actions, she won’t be bullied into submission.

“I just want him to know that it’s not okay to do that. I want this to be a learning experience for other teachers and I’m not going to stop wearing my political stuff,” she said.

Owen Shroyer’s arrest for confronting Jerry Nadler during the treasonous impeachment hearings against Trump has inspired Americans everywhere to stand up to the criminal politicians infesting the government.