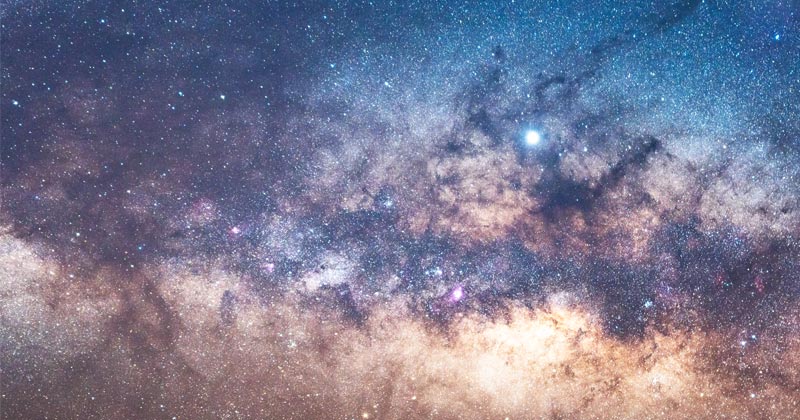 Researchers believe they have found the farthest galaxy group ever seen by mankind, and we are witnessing it emerge from a so-called ‘cosmic dark age’ as it reshapes the universe around it.

The trio of galaxies, named EGS77, dates back to when the universe was just 680 million years old.

In the immediate aftermath of the Big Bang, the universe was a thick, cloudy soup dense with hydrogen atoms and almost entirely bereft of light.

After 500 million years, the epoch of deionization began, in which ever-expanding galaxies began to burn away the fog, splitting the hydrogen atoms into bubbles of plasma, thus allowing light to travel across the cosmos. Think of ice melting on top of a lake in the spring, as NASA so eloquently put it.

This trio, located some 13 billion light-years away, is just now leaving the darkness, encased by three overlapping bubbles of cosmic plasma which are only now deionizing their corner of the universe (clearing away the fog) and letting the light in (and out), thus ending the cosmic dark age.

Astronomers think they’ve spotted these plasma bubbles expanding for the first time, reshaping the universe around them and giving us an, albeit distant, glance into the cosmic past, showcasing some of the earliest light ever observed.

“EGS77 has formed a large bubble that allows its light to travel to Earth,” study co-author Vithal Tilvi, a researcher at Arizona State University, explained. “Eventually, bubbles like these grew around all galaxies and filled intergalactic space, reionizing the universe and clearing the way for light to travel across the cosmos.”