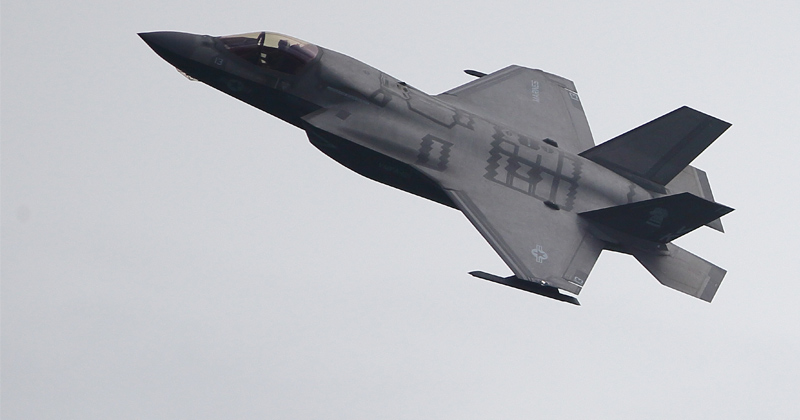 Tests being carried out on the delayed and over-budget F-35 have been suspended as part of a bid to contain the spread of coronavirus, the Pentagon has announced.

The fighter plane has already suffered a string of pricey setbacks.

Activities necessary to complete the F-35’s operational test phase have been halted at Edwards Air Force Base in California, which has shut its doors to all non-essential personnel.

Flight tests have been indefinitely paused, but “select lab and ground test activities are ongoing,” said Brandi Schiff, a spokesperson for the F-35 joint program office.

The setback could also mark yet another delay for the fighter’s Joint Simulation Environment (JSE), which will allow the Pentagon to run threat scenarios in which the F-35 is matched up against military hardware from countries such as Russia and China.

The F-35 program has experienced a dizzying array of technical issues – not to mention a ballooning price tag. A government estimate from March put the price tag at $1.2 trillion.

The Pentagon has been repeatedly accused of whitewashing the extent of problems that the fighter jet faces. The Project on Government Oversight (POGO) reported in 2018 that the US military tried to cover up “life-threatening” design flaws in the aircraft. More recent problems include issues with the plane’s logistics systems.

The suspension of the F-35 tests due to the coronavirus “isn’t a pinnacle event that could somehow affect the realization of the program as a whole,” Mikhail Khodarenok, a retired colonel in the Russian Air Defense Forces and former General Staff officer, told RT. The F-35 is “a conceptual plane for the future” for the US military and they will never give up on it, he said. However, only time will tell how effective this aircraft really is. But Covid-19 will likely inflict massive damage on the US military-industrial complex, Khodarenok noted. Remote work isn’t an option in this industry, and contractors won’t risk their employees getting infected. “How can you remove a worker with all his tools from a production line of a defense company without bringing it to a stop? It’s impossible,” he said. Also no one would want an engineer to work from home on his laptop “because top-secret data will be leaked.”

The coronavirus will, of course, affect the F-35 program just like it affects the life of almost all people on Earth, but “it won’t be fatal,” Sergey Mikhailov, senior fellow at the Russian Institute for Strategic Studies (RISI), said. The testing of some systems will be delayed, but “the US military-industrial complex is strong” and they will likely solve these problems by “pouring even more money into it,” he told RT. However, Mikhailov pointed out that stopping military plants and starting them up again could become costly, especially with the election looming and Donald Trump being forced to decide whether to support the economy or the defense contractors during the crisis.