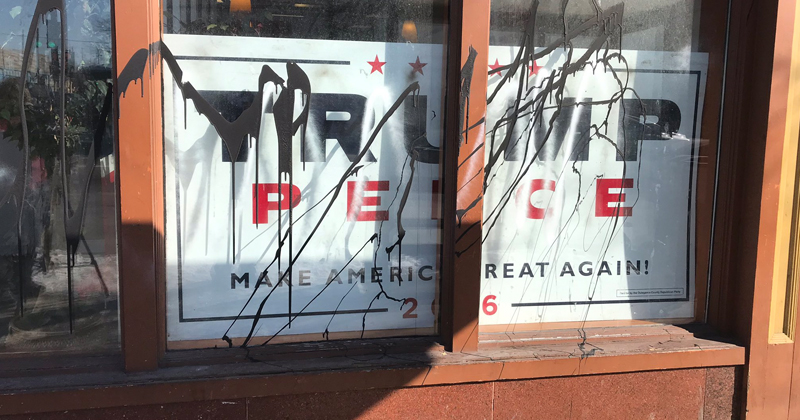 A Trump 2020 re-election campaign headquarters in Wisconsin had its doors and windows defaced Tuesday night, in what some are calling a sign of things to come.

The vandals threw black and white paint on the Wisconsin GOP office in Milwaukee, which displayed several pro-Trump signs.

The @wisgop field office in Milwaukee was vandalized overnight with paint and graffiti on the windows and doors. pic.twitter.com/aPNBLjsJA6

“Our new field office in Milwaukee was vandalized last night,” the Wisconsin GOP wrote on Twitter, highlighting the rising tensions ahead of the DNC in July.

Our new field office in Milwaukee was vandalized last night. This won’t change our commitment to reaching voters in the community. What kind of intolerance can we expect to see when Democrats bring their convention to Milwaukee this summer? #LeadRight pic.twitter.com/sUXQKGAlLI

“This won’t change our commitment to reaching voters in the community. What kind of intolerance can we expect to see when Democrats bring their convention to Milwaukee this summer?”

The damage comes less than two weeks after the office first opened its doors.

Speaking to local Fox affiliate Fox6Now.com, Wisconsin GOP chairman Andrew Hitt said he hopes any future damage can be “limited” to just graffiti, and says the incident is indicative of the left’s “increased intolerance.”

“We’ve seen this increased intolerance of the left,” Hitt stated, admitting security cameras may not have been fully functional at the time. “Freedom of ideas to talk about what we believe in — that’s what we’re here for, to be part of this community.”

The Wisconsin Democrat party also responded to Fox with the following statement: “Unlike the Republican Party, we unequivocally condemn actions like this, regardless of who is targeted.”

Trump won the 10 electoral votes up for grab in the state during the 2016 presidential election, with the exception of 12 out of its 72 counties.

Don’t miss this shocking exclusive as Kaitlin Bennett calls in to the war room to break down how she was attacked on a college campus in Ohio while police ignored her calls for help.