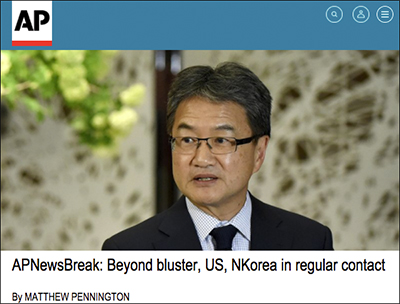 The Trump administration and North Korea have been quietly communicating for the past several months through a diplomatic backchannel, The Associated Press reports.

Contact between the two countries, which was ended by Pyongyang during the last seven months of the Obama administration in response to U.S. sanctions, was reportedly restarted shortly after Donald Trump’s inauguration in January. 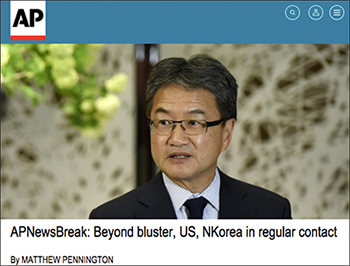 “The communications largely serve as a way to exchange messages, allowing Washington and Pyongyang to relay information,” the AP report states.

While prior reports confirmed the backchannel was used to negotiate the release of Ohio college student Otto Warmbier, who died just 6 days after returning to the U.S. in a coma, the continued talks had not been previously revealed.

Despite the back-and-forth of bellicose threats between Trump and North Korean leader Kim Jong Un, Keith Luse, executive director of the National Committee on North Korea, says the behind the scenes discussions show the rival nations are open to the idea of negotiation.

“Contrary to the public vitriol of the moment, the North Koreans were willing to reopen the New York channel following the election of President Trump and his administration signaled an openness to engage and ‘talk about talks,’” Luse told the AP. “However, the massive trust deficit in Pyongyang and in Washington toward each other has impeded the confidence-building process necessary to have constructive dialogue.”

On the forefront tensions continued to mount Friday as Trump warned North Korea on Twitter that the U.S. military was “locked and loaded.”

Trump’s remark doubled down on a similar warning Tuesday in which he said North Korean threats would be met with “fire and fury.”

“The KPA Strategic Force is now carefully examining the operational plan for making an enveloping fire at the areas around Guam with medium-to-long-range strategic ballistic rocket Hwasong-12 in order to contain the U.S. major military bases on Guam including the Anderson Air Force Base,” a North Korean spokesman said.