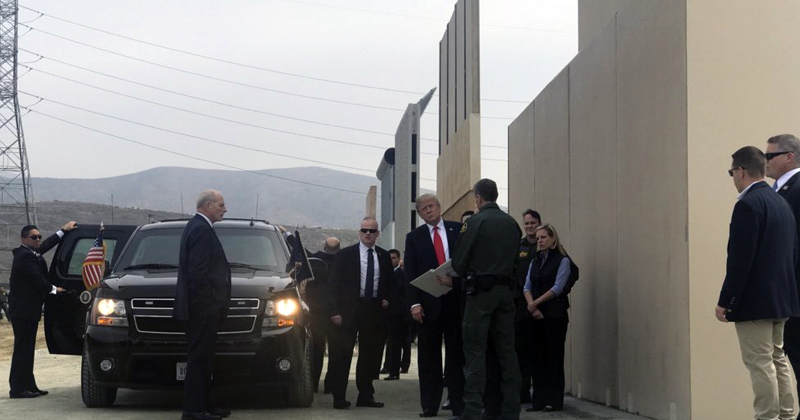 President Trump on Tuesday visited San Diego, the site where prototypes of the border wall he championed during the campaign are being tested.

President Trump has arrived and is speaking with folks in front of the border wall prototypes. pic.twitter.com/DKdEZhTFBR

This marked the president’s first visit to the site, where six US companies constructed eight 30-foot wall mockups designed to meet his demand for a “big, beautiful wall.”

Heading to see the BORDER WALL prototypes in California! pic.twitter.com/fU6Ukc271l

Following an impromptu press briefing, the president said, “I’ll see you at the wall!” as he departed the White House to California.

Before departing for California today, @realDonaldTrump told the Fake News media "I'll see you at the wall."

During the trip, Trump met with several Customs and Border Protection agents, and indicated he favors a see-through wall design because it allows agents to see approaching threats.

.@POTUS while visiting border wall prototypes: "You have to have see through. You have to know what's on the other side of the wall." pic.twitter.com/vfuy1V1HRz

“You have to have see through. You have to know what’s on the other side of the wall,” Trump said.

The president also stressed the importance of the current sheet metal wall, which border agents said stops about 90 percent of illegal entries.

“If you didn’t have walls, you wouldn’t have a country,” the president said.

“They re-established law & order in San Diego when they put up a wall.”

.@POTUS: “They re-established law & order in San Diego when they put up a wall.” https://t.co/JYaziXnUC2 pic.twitter.com/V0tQXQsYKl

“The border wall is truly our first line of defense,” Trump said in prepared remarks.

“The wall will save hundreds of billions of dollars, many, many times what it’s going to cost.”

.@POTUS: “The wall will save hundreds of billions of dollars, many, many times what it’s going to cost.” https://t.co/JYaziXnUC2 pic.twitter.com/SKy7QaFUXQ

Amid the trip, the president also issued a tweet criticizing the state of California over its sanctuary city policies and its refusal to cooperate with federal immigration enforcement.

California’s sanctuary policies are illegal and unconstitutional and put the safety and security of our entire nation at risk. Thousands of dangerous & violent criminal aliens are released as a result of sanctuary policies, set free to prey on innocent Americans. THIS MUST STOP!

Trump supporters held a rally at the site, with many chanting the familiar campaign slogan, “Build that wall!”

#BREAKING: Hundreds of Trump supporters gather in Otay Mesa near the border wall prototypes and chant “Build that wall!” during Trump’s visit. pic.twitter.com/L4f8HJbzuf

Tim Donnelly (who is running for Congress in California) starting a "Build that Wall" chant at Trump Rally in San Diego! pic.twitter.com/1Rk3FP5BRr

In January US Special Forces operatives tested the walls for vulnerabilities, subjecting the designs to thorough durability assessments by using “jackhammers, saws, torches and other tools,” according to the Associated Press.

If we don’t have a wall system, we’re not going to have a country. Congress must fund the BORDER WALL & prohibit grants to sanctuary jurisdictions that threaten the security of our country & the people of our country. We must enforce our laws & protect our people! #BuildTheWall pic.twitter.com/NGqNueukvj