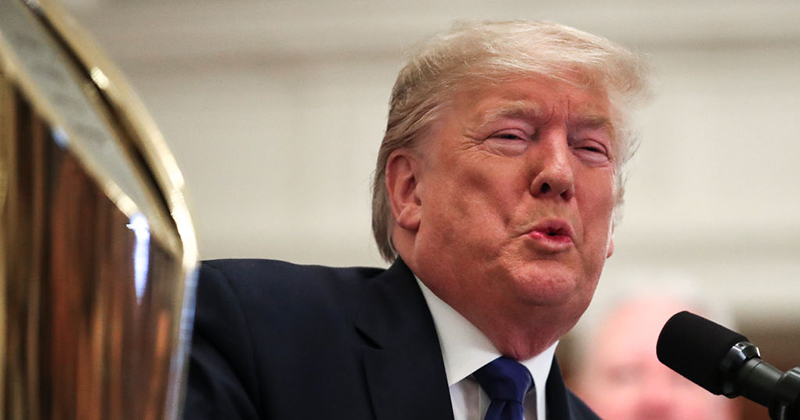 The 111-page summons urges the Senate to “eliminate the threat that the President poses to America’s national security” as it lays out the case against President Trump.

The House legal filing (due by 5pmET) reiterates the findings of the House Intelligence and Judiciary panels, which, after hearing from witnesses and experts, settled on charging Trump with abuse of power and obstruction of Congress.

Additionally, the case that House prosecutors sent to the Senate references new evidence that wasn’t part of the impeachment inquiry, including material from Lev Parnas, an associate of Trump’s personal lawyer Rudy Giuliani, according to Democratic officials familiar with the argument.

“The evidence overwhelmingly establishes that he is guilty of both. The only remaining question is whether the members of the Senate will accept and carry out the responsibility placed on them by the Framers of our Constitution and their constitutional Oaths,” the brief reads.

“History will judge each Senator’s willingness to rise above partisan differences, view the facts honestly, and defend the Constitution.”

The final day Owen Shroyer is in studio before he departs for D.C.. Guests include Chris Cuthbertson, Tom Pappert, and Patrick Howley. Owen covers the epic Champion LSU Tigers’ visit to the White House, the latest Democrat scams, and liberal madness.

Compiled by the seven Democrats serving as impeachment managers, the brief describes the president’s conduct as “the Framer’s worst nightmare” in arguing that he should be impeached and removed from office.

“President Trump’s ongoing pattern of misconduct demonstrates that he is an immediate threat to the Nation and the rule of law. It is imperative that the Senate convict and remove him from office now, and permanently bar him from holding federal office,” they write.

President Trump’s legal team outlined the fiery response to its impeachment summons, calling the two articles of impeachment passed by the House last month “a dangerous attack on the right of the American people to freely choose their president.”

The six-page document – which they stressed is different from the brief that is not due until Monday – offers a taste of the rhetoric expected to be deployed by the president’s defenders in the Senate.

“This is a brazen and unlawful attempt to overturn the results of the 2016 election and interfere with the 2020 election, now just months away,” the filing states.

Trump’s legal team, led by White House counsel Pat Cipollone and Trump personal lawyer Jay Sekulow, is challenging the impeachment on both procedural and constitutional grounds, claiming Trump has been mistreated by House Democrats and that he did nothing wrong.

Read the president’s full response to articles of impeachment:

Notably, at least four of the impeachment managers, including Schiff, are scheduled to appear Sunday on political talk shows.

Former Rep. Trey Gowdy (R-SC) told Fox News this week that he predicts President Donald Trump’s Senate trial will be short and that the president’s best defense is a review of the transcript.

“The transcript is the single best piece of evidence that the president has,” Gowdy said. “Who brought up Rudy Giuliani’s name? It wasn’t Donald Trump. It was Zelensky. This was the second call, not the first call. If President Trump were really hell-bent on ensuring that Ukraine investigate the Bidens, would he not have brought that up in the first telephone call he had with Zelensky? Why wait till the second?”

“As far as the timing of this trial is concerned, Trey, they are estimates that it could be quick, it could last as long as six weeks,” Fox News co-host Sandra Smith said. “Where do you fall on that, and what is the length of time mean?”

“If they open it up to witnesses, and they want Bolton, and then there’s some Republicans that want four or five other witnesses, it could last six weeks,” Gowdy continued. “Sandra, I just have not met anyone whose opinion has changed during the pendency of this investigation. I can’t identify – maybe three open-minded jurors in the U.S. Senate. I just don’t, no matter how long it lasts, I don’t think it’s gonna change anyone’s mind in the Senate or among my fellow citizens. The shorter the better.”

Fox News co-host Bill Hemmer asked, “Did you want to give us a time frame for that?”

“I’m saying two weeks,” Gowdy said. “If it goes six weeks, then they’re going to have to make some hard decisions on which witnesses are important enough to hear from and which ones, while they may have relevant evidence, we just don’t – I think in terms of a real trial.”

“Why would you ever not call a witness if that witness has relevant information?” Gowdy continued. “How do you pick which ones to call and which ones not to? You can never do that in a real trial. So, if we’re going to open this thing up anew to a brand new investigation, then call everybody, and God knows how long that’ll take.”

“President Trump has done nothing wrong and is confident that this team will defend him, the voters, and our democracy from this baseless, illegitimate impeachment,” White House Press Secretary Stephanie Grisham said in a statement on Friday night.