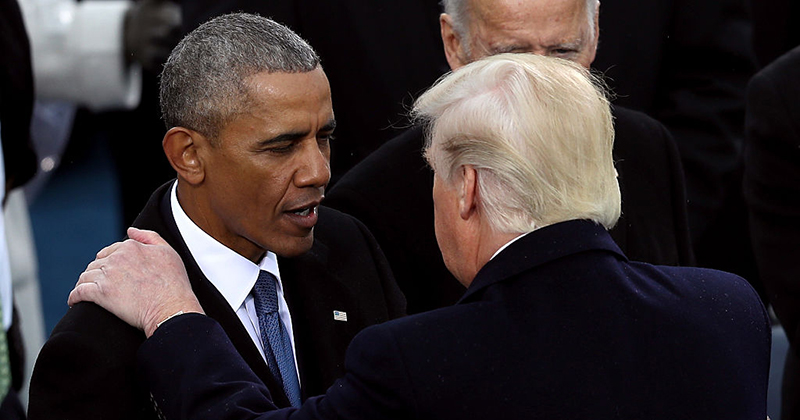 President Trump said Thursday that the Senate should call Barack Obama to testify regarding the unmasking scandal, with Trump declaring that Obama “knew everything”.

“If I were a Senator or Congressman, the first person I would call to testify about the biggest political crime and scandal in the history of the USA, by FAR, is former President Obama.” Trump tweeted.

“He knew EVERYTHING.” Trump added, asking Lindsey Graham to “Do it.”

“Just do it. No more Mr. Nice Guy. No more talk!” the President added.

If I were a Senator or Congressman, the first person I would call to testify about the biggest political crime and scandal in the history of the USA, by FAR, is former President Obama. He knew EVERYTHING. Do it @LindseyGrahamSC, just do it. No more Mr. Nice Guy. No more talk!

Alex Jones exposes the truth behind the obamagate spy scandal, and how Infowars has once again been vindicated as Obama spies in the Trump campaign are confirmed.

The President followed up with several more tweets regarding the scandal now being dubbed ‘Obamagate’:

Where is the 302? It is missing. Was it stolen or destroyed? General Flynn is being persecuted! #OBAMAGATE

Trump made the comments as Graham announced an “in-depth” probe into abuses by the Obama-era Justice Department, following the publication of a list of names associated with the unmasking of former national security advisor Gen. Michael Flynn.

“The Judiciary Committee will begin holding multiple, in-depth congressional hearings regarding all things related to Crossfire Hurricane starting in early June,” Graham said, referring to the FBI’s code name for the Russia investigation.

Attorneys Robert Barnes and Tyler Nixon join The Alex Jones Show to give their expert take on the abuses of power in the politically charged cases against General Flynn and Roger Stone.

Referring to the possibility of Obama being called as a witness, Graham said “I am greatly concerned about the precedent that would be set by calling a former president for oversight.”

“No president is above the law.  However, the presidency has executive privilege claims against other branches of government,” Graham said, adding “To say we are living in unusual times is an understatement.”

“I think it would be a bad precedent to compel a former president to come before the Congress, that would open up a can of worms. For a variety of reasons, I don't think that's a good idea."pic.twitter.com/fQJzZyFVoK