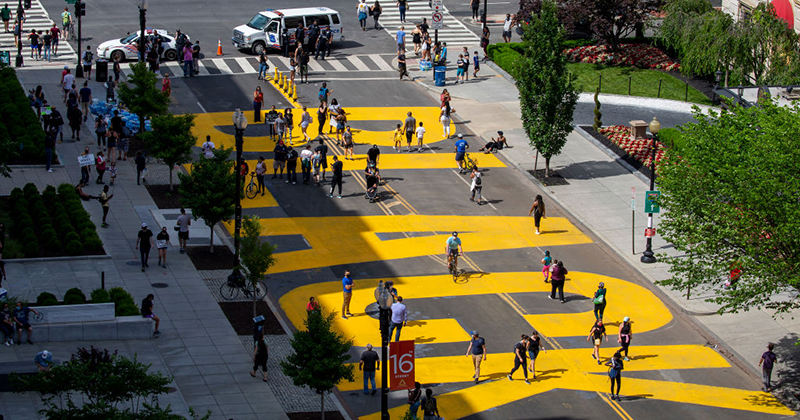 President Donald Trump blasted the mayor of Washington, DC as incompetent after a street near the White House was renamed ‘Black Lives Matter Plaza’ and the slogan was painted on a road leading to 1600 Pennsylvania Avenue.

On Friday, Mayor Muriel Bowser commissioned ‘Black Lives Matter’ to be painted on the street that leads to the White House ahead of a huge planned demonstration this weekend that could see as many as one million people.

The letters span two blocks of 16th Street, are 35 feet high and take up the width of the two-lane road.

This isn’t enough. The whole planet Earth needs to be renamed ‘Black Lives Matter’. That would be totally normal. pic.twitter.com/PYlF2OKcGz

During Thursday night’s broadcast of “Tucker Carlson Tonight,” the Fox host called out the major corporations putting money into groups like Black Lives Matter who are funding the protests nationwide that have turned into violent riots.

She also renamed a portion of Lafayette Square, the site of Trump’s ill-time photo-op as Black Lives Matter Plaza.

This all came as Bowser announced that the Utah National Guard, more than 1,200 troops of 10 states, would be evicted from all DC hotels on Saturday.

‘The incompetent Mayor of Washington, DC, @MayorBowser, who’s budget is totally out of control and is constantly coming back to us for ‘handouts’, is now fighting with the National Guard, who saved her from great embarrassment over the last number of nights,’ Trump tweeted Friday afternoon.

A planned demonstration protesting police brutality against black Americans and over the death of George Floyd at the hands of Minneapolis police officers this weekend that could see as many as one million people.

In preparation, the White House has effectively turned itself into a fortress, with seven-to-nine-foot high black fences erected and armed guards and sharpshooters surrounding the perimeter.