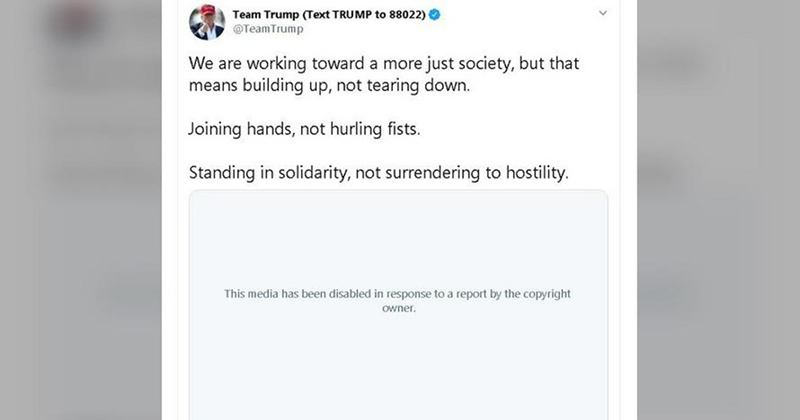 US President Donald Trump’s campaign team slammed Twitter founder and CEO Jack Dorsey for “censoring” its video, made amid the police brutality protests and unrest across American cities.

The clip, titled ‘Healing, Not Hatred’, was posted on Twitter on Thursday, but has been taken down due to what appears to be an unspecified copyright claim.

Twitter and @Jack are censoring this uplifting and unifying message from President Trump after the #GeorgeFloyd tragedy.

The same speech the media refused to cover.

The Trump campaign said the video contains “the same speech the media refused to cover.” The group posted the same clip on YouTube and urged everyone to “make it go viral.”

Hotep Jesus joins The Alex Jones Show to expose the truth behind kneeling to other people, and how racists can hide out in a crowd with empty virtue signals.

In the nearly 4-minute video, Trump is heard calling the death of George Floyd a “grave tragedy,” and praising the “peaceful protesters” and “law-abiding citizens.” At the same time, Trump harshly condemned the unrest that followed many of the rallies.

What we are now seeing on the streets of our cities has nothing to do with justice and with peace. The memory of George Floyd is being dishonored by rioters, looters, and anarchists.

Trump has been engaged in a public spat with Twitter, after the company began “fact-checking” his tweets, and later flagged a tweet directed at the looters as “glorifying violence.” In the tweet in question, the president warned that “when the looting starts, the shooting starts.”

In dozens of US cities, protesters have taken to the streets to demand justice for George Floyd – an unarmed black man who died while being arrested in Minneapolis – and to end police brutality. Some of the demonstrations have descended into rioting and clashes with police, prompting state and local authorities to impose curfews and call in the National Guard.