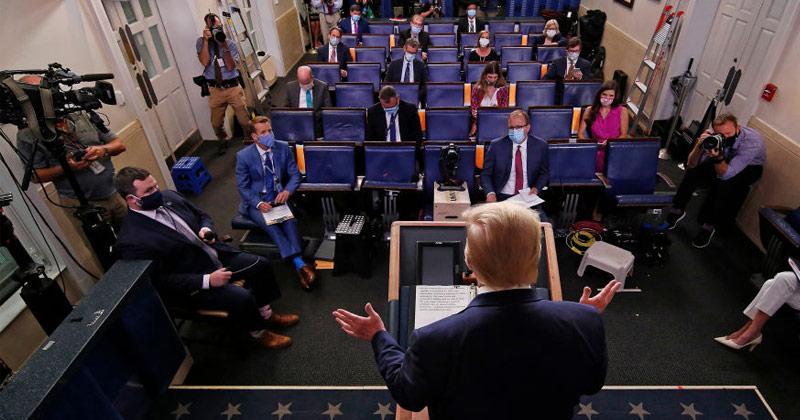 President Trump cancelled part of the Republican National Convention slated next month for Jacksonville, Fla., due to coronavirus concerns.

The president said he didn’t want the convention to be blamed as a “hot spot” for Covid-19 after case numbers in Florida have flared up, although it’s worth noting that the state has been under intense scrutiny lately for how it counts cases, especially after a fatal motorcycle accident was attributed to ‘Covid-19.’

“To have a big convention, it’s just not right,” he said. “I just felt that it was wrong to have people to go to a hot spot.”

However, the delegate count on the first night will still take place in Charlotte, NC, so the true intent of the convention will still happen, just without all the pomp of a full-blown show.

The Jacksonville nights of the convention were scheduled for August 24-27.

“We won’t do a big, crowded convention per se,” Trump added. “It’s just not the right time for that. I care deeply about the people in Florida, and everywhere else, frankly, in this country, and people in the world.”

The decision was criticized by some of his base who don’t like the optics of revolving everything around Covid-19.

Others, however, felt that Trump, who’s practically running unopposed on the Republican ticket, had little to gain from hosting a politically-risky convention which could hamper his ability to host nationwide rallies if he’s blamed for an “explosion” in Florida Covid-19 cases that has already started.

Alex Jones takes a call from a first responder who witnessed a motorcycle accident victim’s death get listed as a Covid-19 fatality.