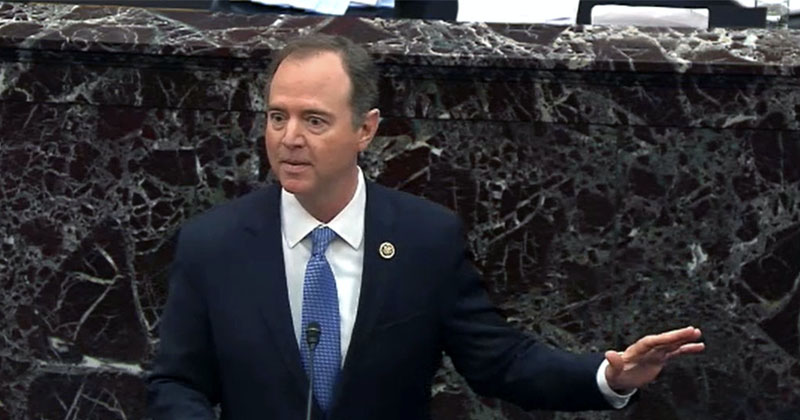 House Intelligence Committee Chairman Adam Schiff (D-Calif.) launched into a bizarre abstract rant about hypothetical scenarios President Trump would engage in if he was re-elected in 2020 — including surrendering the state of Alaska to the Russian government.

Schiff claimed on the Senate floor Monday that should Trump could very well exercise absurd abuses that wouldn’t be impeachable, but could still harm the nation.

“Trump could offer Alaska to the Russians in exchange for support in the next election,” Schiff said. “Or decide to move to Mar-A-Lago permanently and let Jared Kushner run the country, delegating to him the decision of whether to go to war.”

If not removed, “Trump could give Alaska to the Russians.” Schiff really just said this. pic.twitter.com/SydXuhfYpF

“Because those things are not necessarily criminal, this argument would allow that he could not be impeached for such abuses of power.”

“Of course this would be absurd. More than absurd, it would be dangerous,” he added.

How this insane argument has anything whatsoever to do with the articles of impeachment drafted by House Democrats is unclear.

Interestingly, the United States acquired Alaska from Russia in 1867 for $7.2 million in a treaty that became known as the Alaska Purchase.

The fact Schiff has rehashed the thoroughly-debunked Russian collusion narrative for his closing remarks before the Senate impeachment vote this week underscores the reality that the Democrat case for impeachment has totally collapsed.

The Republican-majority Senate is set to acquit Trump on Wednesday.

For the Democrats, the question ‘to bork or no to bork’ now stares them in the face as plainly as Adam Schiff’s beady eyes.