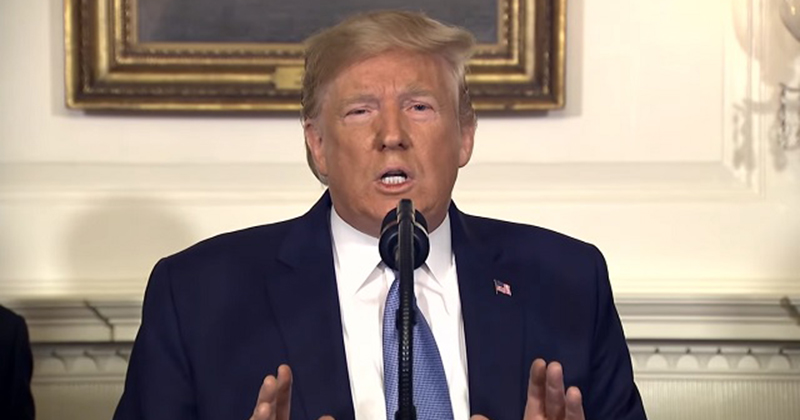 Even though the shooter in Ohio was a leftist antifa-supporting lunatic and Trump could have used that as a reason not to move against Americans’ rights, he chose not to reveal that to the public and only focused on the El Paso shooters’ alleged manifesto, which he said was “consumed by racist hate.”

“In one voice, our nation must condemn racism, bigotry, and white supremacy,” Trump said. “These sinister ideologies must be defeated. Hate has no place in America. Hatred warps the mind, ravages the heart, and devours the soul. We have asked the FBI to identify all further resources they need to investigate and disrupt hate crimes and domestic terrorism — whatever they need.”

He only described the Ohio shooter as a “twisted monster” before launching into his assault on the First Amendment, the Second Amendment, the Fifth Amendment and the internet itself.

We must recognize that the Internet has provided a dangerous avenue to radicalize disturbed minds and perform demented acts. We must shine light on the dark recesses of the Internet, and stop mass murders before they start. The Internet, likewise, is used for human trafficking, illegal drug distribution, and so many other heinous crimes.

The perils of the Internet and social media cannot be ignored, and they will not be ignored. In the two decades since Columbine, our nation has watched with rising horror and dread as one mass shooting has followed another — over and over again, decade after decade. We cannot allow ourselves to feel powerless.

We can and will stop this evil contagion. In that task, we must honor the sacred memory of those we have lost by acting as one people. Open wounds cannot heal if we are divided. We must seek real, bipartisan solutions. We have to do that in a bipartisan manner. That will truly make America safer and better for all.

First, we must do a better job of identifying and acting on early warning signs. I am directing the Department of Justice to work in partisan — partnership with local, state, and federal agencies, as well as social media companies, to develop tools that can detect mass shooters before they strike. As an example, the monster in the Parkland high school in Florida had many red flags against him, and yet nobody took decisive action.

When the mainstream media raises the actions of psychotic murderers to infamy status, when does the responsibility for triggering copycat attacks fall on them?

Nobody did anything. Why not? Second, we must stop the glorification of violence in our society. This includes the gruesome and grisly video games that are now commonplace. It is too easy today for troubled youth to surround themselves with a culture that celebrates violence. We must stop or substantially reduce this, and it has to begin immediately.

Cultural change is hard, but each of us can choose to build a culture that celebrates the inherent worth and dignity of every human life. That’s what we have to do. Third, we must reform our mental health laws to better identify mentally disturbed individuals who may commit acts of violence and make sure those people not only get treatment, but, when necessary, involuntary confinement.

Mental illness and hatred pulls the trigger, not the gun. Fourth, we must make sure that those judged to pose a grave risk to public safety do not have access to firearms, and that, if they do, those firearms can be taken through rapid due process. That is why I have called for red flag laws, also known as extreme risk protection orders.

Today, I am also directing the Department of Justice to propose legislation ensuring that those who commit hate crimes and mass murders face the death penalty, and that this capital punishment be delivered quickly, decisively, and without years of needless delay. These are just a few of the areas of cooperation that we can pursue.

I am open and ready to listen and discuss all ideas that will actually work and make a very big difference. Republicans and Democrats have proven that we can join together in a bipartisan fashion to address this plague. Last year, we enacted the STOP School Violence and Fix NICS Acts into law, providing grants to improve school safety and strengthening critical background checks for firearm purchases.

At my direction, the Department of Justice banned bump stocks. Last year, we prosecuted a record number of firearms offenses. But there is so much more that we have to do. Now is the time to set destructive partisanship aside — so destructive — and find the courage to answer hatred with unity, devotion, and love.

Our future is in our control. America will rise to the challenge. We will always have and we always will win. The choice is ours and ours alone. It is not up to mentally ill monsters; it is up to us. If we are able to pass great legislation after all of these years, we will ensure that those who were attacked will not have died in vain.

He finished his statement by saying, “May God bless the memory of those who perished in Toledo,” where no attack even occurred.

Trump, struggling with a bad case of what appears to be dry mouth, falsely claimed the Ohio mass shooting took place in Toledo. (It happened in Dayton.) pic.twitter.com/dzOcsIV5ox

There is no way to interpret this other than a complete and total betrayal.

If Hillary Clinton was elected President, there is no way she could have gotten any of this through a Republican-controlled Senate and the same goes for the terrible spending bill Trump passed in February which threw open our borders and led to the record immigration levels we’re now experiencing.
Taking away American’s rights is only going to accelerate the collapse of our country and lead to more violence, but our leaders, including Donald Trump, don’t give a damn.

I don’t know whether Trump is being blackmailed by Jeffrey Epstein’s crew or if he is just a coward but it doesn’t matter either way.

The DOJ under William Barr (whose father gave Epstein a job at the prestigious Dalton School on New York City’s Upper East Side at age 21) has already been launching attacks on encryption and last month ordered the reinstatement of the death penalty (while refusing to prosecute James Comey):

The FBI and the DOJ have a history of false claims and exaggeration when it comes to the dangers of encryption. Now, they want us to turn the page and trust anew. You should refuse. Let’s hope Congress does too. https://t.co/kHAadvaihN

This speech could have been delivered by Hillary Clinton. Had the exact same words come out of her mouth instead of Donald Trump’s, the right would be up in arms and there would be total pandemonium.

I can see no reason not to actively support Trump’s impeachment after this betrayal.

Start calling your Senators and Congressmen immediately and demanding they do not pass these attacks on the Bill of Rights.

This assault is being combined with an attack on the basic infrastructure of the internet which has led to the Free Speech hosting site Epik and their anti-DDOS service BitMitigate, which serves 8Chan and The Daily Stormer among many other websites, being effectively kicked off the internet.

Looks like Epik (which provides hosting and anti-DDOS protection for Gab, the Daily Stormer, and now 8chan) is now getting its own backend services pulled by yet another infrastructure company, Voxility. https://t.co/nRVRonbHLF

Per The Daily Stormer, Epik's BitMitigate was dropped by @voxility and is totally useless right now.

That means 8chan and The Daily Stormer are down too.

Unclear what the fix is for them but it's clear that hate sites need collaborators to survive. pic.twitter.com/1SKqaM2w5Y

If you don’t think they’re going to expand this censorship to everyone who questions the establishment then you haven’t been paying attention.

This is why I spoke out against the seizure of The Daily Stormer on day one. GooTube started off by censoring American Renaissance and now they’ve effectively algorithmically censored the entire internet outside of a few whitelisted controlled media sites. They even blocked 2020 Democratic presidential candidate Tulsi Gabbard from advertising after her win in the first Democratic debate. In the minds of our rulers, absolutely nothing which goes against the narrative can be tolerated.

The response to this assault on our rights should be no different than the response to George Bush’s despicable Patriot Act after September 11th, 2001.

While we all hoped Trump would be different and would wipe away our crooked establishment, we now know he’s been totally conquered by it.