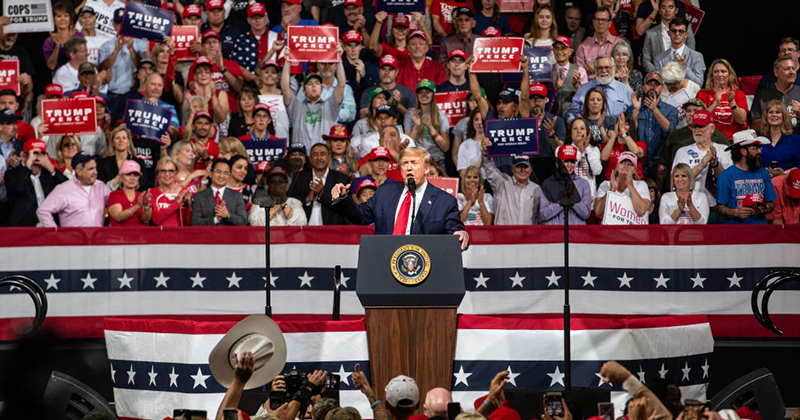 Wowing a crowd of thousands in Phoenix Wednesday night, President Trump tore into his Democratic opponents, declaring that it doesn’t matter who he goes up against because “We’re going to win”.

Trump accused the Democrats of attempting to “poison” democracy, noting that he has been subjected to “very unfair witch hunts and partisan … crusades” against his Presidency.

“And guess what? They failed,” he proclaimed to a raucous ovation. “And our polls numbers today are higher than they’ve ever been before.”

“I actually think we’re going to win by a lot – just like we did last time,” Trump urged.

Trump particularly focused on the the Russia ‘hoax’, noting that “they stole three years” of his Presidency, and adding ‘They spied on my campaign.’

“The ones at the top they were absolute scum,” Trump declared, suggesting that if ‘dirty cop’ FBI officials had targeted Democrats in the same way, “They’d be in jail for 50 years.”

Focusing on the current Democratic frontrunner, Sanders, Trump mocked the notion that Americans would vote for a socialist at a time when the economy is booming and the country is experiencing record employment gains.

“The country’s had the best year it’s ever had – oh let’s get a new president, let’s bring in Crazy Bernie,” Trump bellowed to much laughter.

The rally had everything Trump supporters have come to expect, with ‘lock her up chants’ erupting when the President mentioned ‘crooked’ Hillary Clinton.

As he was in Phoenix, The President also spoke about the notorious airport tarmac meeting between Bill Clinton and former Attorney General Loretta Lynch, where it is alleged the pair discussed Hillary Clinton’s home cooked email server.

“What do you think he was doing with the attorney general?” Trump questioned, adding “Lot of crooked stuff going on. She was a real beauty,” he said  of Lynch.

Watch the full rally below: