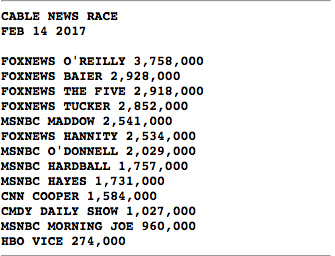 President Donald Trump stepped up his attack on cable network CNN during a press conference Thursday, telling reporter Jim Acosta he had rebranded the media outlet as “very fake news.”

Newsbusters.org reports Trump “then knocked CNN for not having ratings that measure up to some of the other people that are waiting” to ask a question, to which Acosta replied, “they’re pretty good right now, actually, Mr. President.”

Following a brief back and forth over other questions, the president then declared he was changing his label for Acosta’s media outlet to “very fake news,” at which point several in attendance burst into laughter.

See a transcript of the exchange from Newsbusters below:

ACOSTA: Just because the attack of fake news and attacking our network, I just want to ask you, sir —

TRUMP: I’m changing it from fake news though.

ACOSTA: Aren’t you concerned, sir, that you are undermining the people’s faith in the First Amendment, freedom of the press, the press in this country when you call stories you don’t like fake news. Why not just say it’s a story I don’t like.

ACOSTA: When you call it fake news, you’re undermining confidence in our news media.

Trump and Acosta had debated at a previous press conference in January, where the president refused to take a question from the reporter and labeled the organization “fake news.”