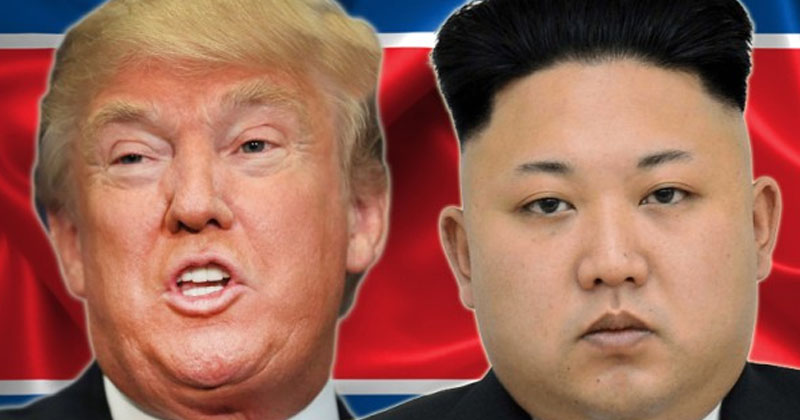 One day after North Korea’s UN ambassador told Reuters Saturday that further denuclearization talks are “off the negotiating table” following a breakdown in talks, and the rogue country conducted a “very important” test at its Sohae satellite launch site, president Trump – whom downplayed Pyongyang’s latest actions, including missile tests, saying North Korean leader Kim Jong Un “is too smart and has far too much to lose, everything actually” if he acts in a hostile way toward the U.S.

Kim Jong Un is too smart and has far too much to lose, everything actually, if he acts in a hostile way. He signed a strong Denuclearization Agreement with me in Singapore. He does not want to void his special relationship with the President of the United States or interfere…. https://t.co/THfOjfB2uE

Trump also tweeted that North Korea “must denuclearize as promised,” despite the communist nation’s ominous assessment that talks are now over.

Trump said Kim signed a “strong Denuclearization Agreement” when the pair met in Singapore in 2018, although steps toward North Korea giving up its nuclear ambitions were never formalized.

….with the U.S. Presidential Election in November. North Korea, under the leadership of Kim Jong Un, has tremendous economic potential, but it must denuclearize as promised. NATO, China, Russia, Japan, and the entire world is unified on this issue!

On Saturday, North Korea said it conducted a “very important test” at its long-range projectile launch site on Saturday.

The test appears to be a ground-based test of a rocket engine to propel a satellite or an intercontinental ballistic missile (ICBM) into low Earth orbit.

The outcome of the test was said to be “successful” and will play a key part in changing North Korea’s strategic position in the near future, the state-run Korean Central News Agency said in a statement Sunday, citing a spokesman at the Academy of the National Defense Science. It didn’t elaborate or say what was tested.

The rocket engine test comes hours after NoKo ambassador, Kim Song, told Reuters in a statement that, “We do not need to have lengthy talks with the US now and denuclearization is already gone out of the negotiating table.”

He added that “sustained and substantial dialogue” sought by the Trump administration was a “time-saving trick” to accommodate its domestic political agenda, likely referring to the upcoming election year where President Trump is trying to get as many wins as possible to fulfill talking points of first-term success.

Missile experts told Reuters that North Koreans had conducted a static test of a rocket engine on Saturday.

“If it is indeed a static engine test for a new solid or liquid fuel missile, it is yet another loud signal that the door for diplomacy is quickly slamming if it isn’t already,” said Vipin Narang, a missile expert at the Massachusetts Institute of Technology.

“This could be a very credible signal of what might await the world after the New Year,” Narang warned.

As Bloomberg notes, the Sohae Launch Facility, which Kim once said he dismantled in a concession to Trump, was being monitored for possible missile or engine tests since a satellite image from Thursday showed new activity. A South Korean presidential official was reported as saying Sunday that the country is “closely watching” the situation after the test was announced. The statement suggests that “it’s likely a test of a solid-fuel engine for intercontinental ballistic missiles,” said Kim Dong-yub, head of the research at the Institute for Far Eastern Studies in Seoul.

For more than two years, Kim has refrained from tests of nuclear bombs and missiles capable of carrying them to the U.S. as he pursued unprecedented talks with Trump. However, in recent months, Kim warned that he would find a “new path” if the U.S. doesn’t ease up on sanctions and other policies that Pyongyang views as hostile. The Trump administration has called for North Korea to give up its nuclear weapons before it can receive rewards, a move Pyongyang sees as political suicide.

“We keep a close eye on North Korea all the time,” Defense Secretary Mark Esper said on Saturday at the Reagan National Defense Forum in Simi Valley, California. “The best path forward with regard to North Korea is a diplomatic solution, a political agreement, that gets us to a denuclearized peninsula. That’s all in everybody’s interest.”

The two sides also revived a war of words last week with Trump calling Kim a “Rocket Man” again, and a North Korean official returning the favor by calling Trump “dotard”, the same as NoKo first called the US president in 2017.

Pyongyang imposed a year-end deadline for the U.S. to propose a plan it would be satisfied with in return for its abandonment of a nuclear arsenal. Washington’s decision will determine what “Christmas gift” it will get from Kim and could prompt the North to take a “new path” from 2020, it warned.

Gerald Celente praises President Trump’s efforts to broker peace with one of the most unreachable dictators in the modern era, as Trump Derangement Syndrome infects the mainstream media into showing their disdain for peace.