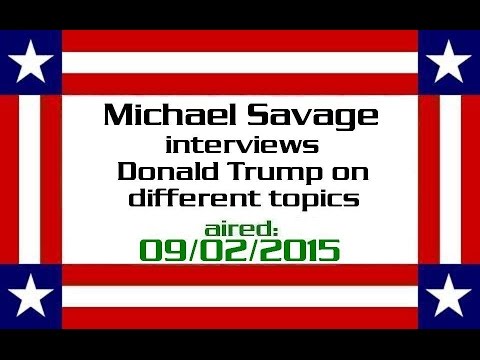 “Well, you [as president] would knock the hell out of the training camps, that one’s a given, and it’s incredible we don’t do it [since] we know where they are,” he said on the Michael Savage Show. “It’s almost like, ‘are we protecting these people?'”

Trump is closer to the truth than he realizes; a secret U.S. government document obtained by Judicial Watch reveals the U.S. and other NATO nations deliberately backed al-Qaeda in Iraq, which morphed into ISIS, and other Islamic extremist groups to overthrow Syrian president Bashir al-Assad.

“The Salafist [sic], the Muslim Brotherhood and AQI [al-Qaeda in Iraq] are the major forces driving the insurgency in Syria,” the Pentagon document stated. “The West, Gulf countries, and Turkey support [this] opposition, while Russia, China and Iran ‘support the [Assad] regime.’”

ISIS grew directly out of al-Qaeda in Iraq when the latter gained territory in Syria in 2013.

“On April 8, 2013, the Islamic State of Iraq (ISI) – Al-Qaeda in Iraq – released a recorded audio message by its leader, Abu Bakr Al-Baghdadi, in which he announced that the Syria jihadi group Jabhat Al-Nusra (JN) has been merely an extension of ISI [Islamic State of Iraq] in Syria,” the Middle East Media Research Institute reported. “…Al-Baghdadi announces that the names ISI and JN are not to be used anymore; instead, he declares the official merging of the two groups under the name ‘Islamic State of Iraq and Al-Sham’ [also known as ISIS].”

And Turkey’s prime minister, a U.S. and NATO ally, was caught shipping arms to al-Qaeda and ISIS via Syria-bound trucks operated by the country’s intelligence agency, according to Turkish military officials in early 2015.

Prime Minister Ahmet Davutoglu banned media from reporting on three of the trucks searched by the military’s Gendarmerie General Command, which discovered 45 to 55 missiles or rockets, 30 to 40 crates of ammunition, including mortar rounds, and Douchka anti-aircraft ammunition.

“The trucks were carrying weapons and supplies to the al-Qaeda terror organization,” a report by the Gendarmerie General Command stated.

“Though the scandal is tearing the country apart, the government opted for its favorite tactic of covering it up,” Turkish journalist Fehim Taştekin reported. “A court in Adana banned written, visual and Internet media outlets from any reporting and commenting on the stopping of the trucks and the search.”

“All online content about the incident has been deleted.”

Except for one video, which is available here.