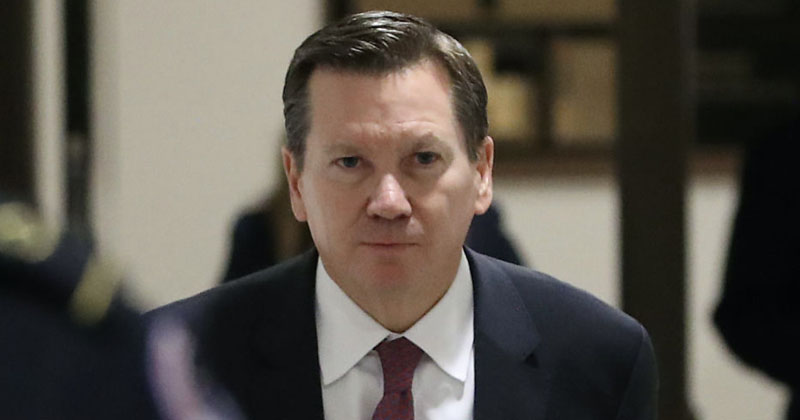 Atkinson’s closed-door testimony was so troubling to House Republicans that they launched an investigation into his role into what President Trump and his allies coined the ‘impeachment hoax.’

Ranking member of the House Intelligence Intelligence Committee Devin Nunes (R-CA) told SarahCarter.com that transcripts of Atkinson’s secret testimony would expose that he either lied or needs to make corrections to his statements to lawmakers.

Trump notified the Senate and House Intelligence Committees of his decision to fire Atkinson, according to Politico, citing two congressional officials and a copy of a letter dated April 3.

“This is to advise that I am exercising my power as president to remove from office the inspector general of the intelligence community, effective 30 days from today,” wrote Trump, who added that he “no longer” has the fullest confidence in Atkinson.

….the Ukraine Hoax that became the Impeachment Scam. Must get the ICIG answers by Friday because this is the guy who lit the fuse. So if he wants to clear his name, prove that his office is indeed incompetent.” @DevinNunes @MariaBartiromo @FoxNews The ICIG never wanted proof!

Democrats had a fit at the news, with Senate Intelligence Committee Vice Chairman Mark Warner (D-VA) calling Atkinson’s firing “unconscionable” while accusing Trump (with a straight face?) of an ongoing effort to politicize intelligence.

“In the midst of a national emergency, it is unconscionable that the president is once again attempting to undermine the integrity of the intelligence community by firing yet another intelligence official simply for doing his job,” wrote Warner in a statement.

Warner’s House counterpart, Intelligence Committee Chairman Adam Schiff (D-CA) called Atkinson’s firing “retribution” in the “dead of night” – adding that it’s “yet another blatant attempt by the president to gut the independence of the intelligence community and retaliate against those who dare to expose presidential wrongdoing.”

Whistleblower lawyer and Disneyland aficionado Mark Zaid – who once bragged about getting security clearances for pedophiles, called the firing “delayed retaliatory action” for Atkinson’s “proper handling of a whistleblower complaint.”

“This action is disgraceful and undermines the integrity of the whistleblower system,” said Zaid. “It is time GOP members of the Senate stand up for the rule of law and speak out against this president.”

The whistleblower complaint effectively kicked off the House’s impeachment inquiry, which began in late September amid allegations that Trump had solicited foreign interference in the 2020 election when he asked Ukraine’s president to investigate his political opponents, including Joe Biden.

Atkinson opposed the decision by then-acting director of national intelligence Joseph Maguire to withhold the whistleblower complaint from the House and Senate intelligence committees — in particular, Maguire’s decision to seek guidance on the issue from the Justice Department, rather than turn it over to Congress as required by law. –Politico

To learn more about Atkinson, read here and here

The impeachment charade has blown-up in the Democrat and Neocon faces, but it doesn’t end there.