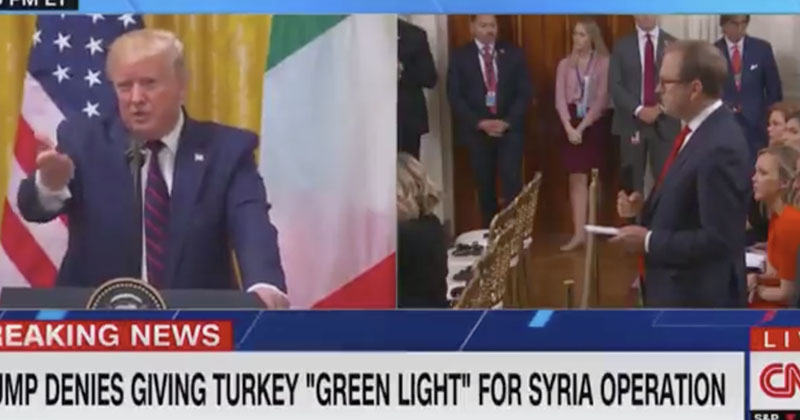 President Trump laid into ABC News and the mainstream media in general for pushing an actual doctored video of a Kentucky gun range shootout as a Turkish strike in Syria, calling the network “FAKE NEWS.”

During a press conference with Italian President Sergio Mattarella on Wednesday, Trump slammed ABC’s Jonathon Karl after he asked if Trump regrets pulling troops out of Syria and giving Turkey a “green light” to go in the region.

“I didn’t give them a green light,” Trump said. “And when you ask a question like that – it’s very deceptive, Jon. Almost as deceptive as you showing all of the bombings taking place in Syria and it turned out that the bombing you showed on television took place in Kentucky.”

President @realDonaldTrump slams @ABC News for showing video from a gun range in Kentucky that they passed off as from the conflict in Syria. pic.twitter.com/iIXJhYBFSY

“I’m not even sure that ABC even apologized for that but certainly it was a terrible thing,” he said. “I’m looking at this and saying ‘wow that’s pretty bad,’ and it was in Kentucky. It wasn’t in Syria. So I don’t know what you’re going to do about that, but I think ABC owes an apology.”

Shortly after the presser, Trump tweeted out a side-by-side comparison of the actual gun range footage used with the doctored ABC war propaganda passed off as an attack on Syria, adding it was “FAKE NEWS!”

CORRECTION: We’ve taken down video that aired on “World News Tonight” Sunday and “Good Morning America” this morning that appeared to be from the Syrian border immediately after questions were raised about its accuracy. ABC News regrets the error.