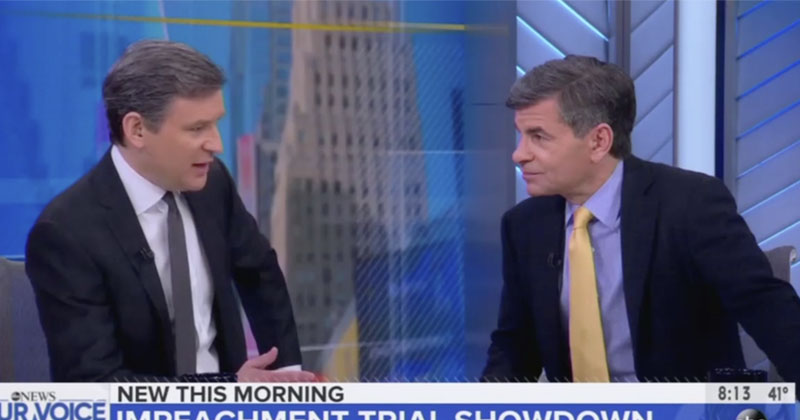 ABC News anchors Dan Harris and chief anchor George Stephanopoulos discussed their fears about what a post-impeachment President Trump would be like, and how the Democrats will continue their crusade to overthrow him.

“Assuming that he is acquitted, which it looks like he certainly will be, what kind of impact do you think that will have on his governing style and his campaign style?” Harris said on “Good Morning America” on Sunday.

“He may feel completely vindicated and unleashed in the wake of this,” Stephanopoulos warned viewers.

Stephanopoulos then suggested that Trump would feel emboldened to commit more crimes in the wake of the upcoming Senate acquittal on Wednesday.

“In the past, whenever the President’s kind of escaped an issue, he’s doubled down, remember just a day after the Mueller testimony back in July of 2019 was the day he made that phone call to the Ukrainian president.”

But Stephanopoulos then assured his audience that the Democrats would continue to pursue whatever avenue they have left to remove Trump from office.

“On the other hand, this story is not, is not over. We’re still waiting to hear from John Bolton. We found out just late on Friday night at midnight that the Justice Department was holding back 24 emails that indicated the President’s thinking on this matter. You can bet that the Democrats are going to make an issue of this going into the election,” he said.

“What kind of impact that will have is uncertain. But the President has not escaped this issue. And one final point on that, the Southern District of New York is still investigating his personal attorney, Rudy Giuliani, for his involvement in this matter,” he added.

“A lot of shoes potentially to drop from this centipede,” Harris agreed.

Rand Paul was denied by the Dems as he attempted to expose the identity of the ‘whistleblower’ in the Senate impeachment hearings.