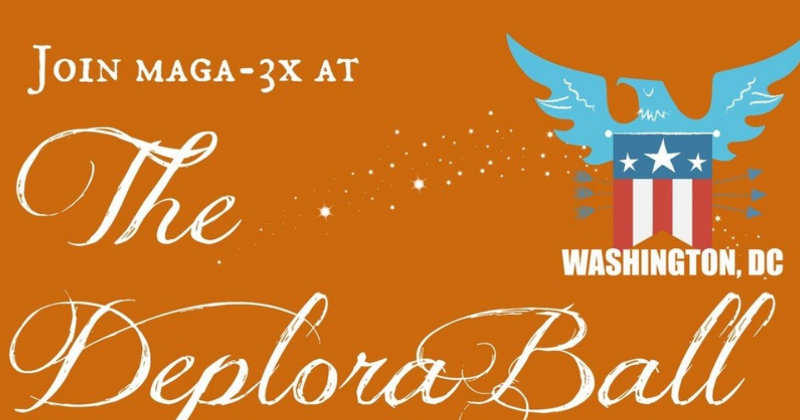 Organizers of the 2017 DeploraBall in Washington, D.C., were forced to move the sold-out event to a larger site after the original venue gave in to social justice warriors.

Planning for DeploraBall has been underway since Donald Trump swamped Hillary Clinton on November 8th, and coordinators were preparing to finalize a contract with Clarendon Ballroom this week, when the business suddenly reneged on its original proposal, refusing to host the private party.

Dan Lamothe of the Washington Post tweeted out the e-vite for DeploraBall on Monday, noting, “Trump fans to hold ‘Deploraball’ at Clarendon Ballroom around inauguration. Various Breitbart/Infowars folks going.”

After leftists began to direct their signature brand of oppressive outrage at Clarendon, the business shifted into damage control mode, tweeting directly to media outlets in denial of any events “contracted” for January 19th.

@DanLamothe @druek @ABC7News @wusa9 We have no event contracted for this date. This is simply untrue.

This attempt to discredit organizers was immediately countered by Mike Cernovich, coordinator and partial financier of DeploraBall, who released the original paperwork from Clarendon, saying, “Here is proposal from @CBallroom for Deploraball. They are refusing to honor the proposal, won’t host event.”

In an interview with WeAreChange.org, Cernovich said, “Some still wonder why Trump won, and now you have the answer. We can’t even have a party – open to everyone, including liberals, gays, blacks, Latinos, whites, women, men, trans, and everyone else – without having Hillary supporters harass the venue owner to shut us down.”

Head DeploraBall organizer, Jack Posobiec, told Infowars “we had a hold on the date and were negotiating the proposal – we planned to sign yesterday. Suddenly the venue called us up extremely angry and unwilling to work with us. It’s all because Washington Post put pressure on them.”

“We have had so many more venues and event centers reach out to us now who want our business and hundreds of guests, as well as some special guests who are now asking how they can be a part of the best inauguration party,” he continued. “Its a real blessing for us – we are going to double the size.”

Posobiec took the opportunity to ruffle the feathers of low-info trolls and fake news media operatives alike by tweeting, “Lol no, guys, we are not going to have Deploraball at the Russian Embassy.”

Lol no, guys, we are not going to have Deploraball at the Russian Embassy

“After selling 500 tickets in just over 24 hours, the Deploraball learned that the venue hosting the event would not honor its proposal after they were harassed by Hillary supporters. The good news is that demand is far greater than expected, and the fecklessness of the venue means we can now have a larger party in a bigger venue. The Deploraball is still on. Details coming soon!” 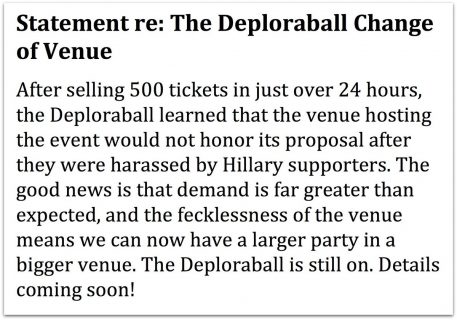