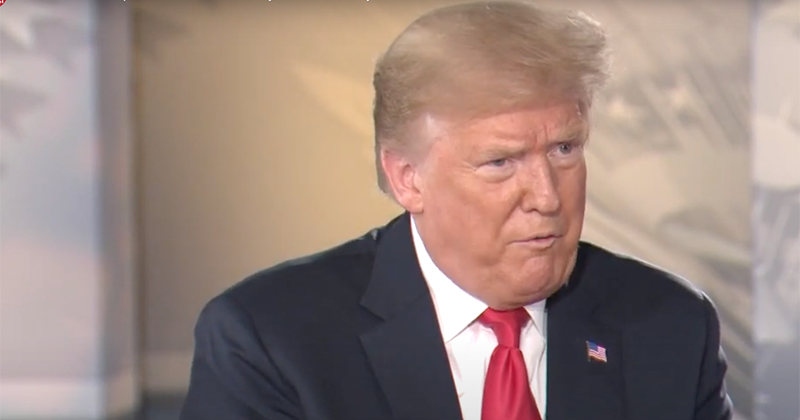 President Trump noted Thursday that it is highly concerning that his Democratic rival for the Presidential election in November cannot even speak properly.

Appearing at a Fox News town hall event, Trump noted that it is conceivable that Joe Biden could become President even though he is not all there mentally.

“Whenever he does talk, he can’t put two sentences together,” Trump said.

“I don’t want to be nice or un-nice. The man can’t speak and he is going to be president, because some people don’t love me, maybe.” the President added.

Trump recalled a number of times when Biden has completely shut down mentally, and his endless gaffes, including recently declaring that 120 million Americans have died from the coronavirus.

If I ever said something so mortifyingly stupid, the Fake News Media would come down on me with a vengeance. This is beyond a normal mistake. Why isn’t the media reporting it? pic.twitter.com/KkuWLkMfp7

“That’s a serious error. That is not a permissible type of error. There is something going on,” Trump urged.

“It’s wonderful to say I feel sorry or that’s too bad, because I do, except we are talking about the presidency of the United States, and it is just not acceptable.” he added.

Trump also noted that Biden, if elected, will be completely overrun by the radical left agenda.

“Look, I don’t think that Biden is a radical left, but it doesn’t matter because they’re going to just do whatever they want to do they’ll take him over,” Trump proclaimed.

“He can’t perform … he’s shot, whether they like it or not, he’s shot. The radical left is going to take him over.” the President added.

“A guy like Biden, he’s not going to have any power to do anything about it, and they’re dragging him,” Trump urged.

Elsewhere during the town hall, Trump addressed the continuing unrest in the nation at the hands of “vandals”, “agitators, and “terrorists, in a sense.”

“Democrats think it’s wonderful that they’re destroying our country. It’s a very sick thing that’s going on,” Trump said, adding that “Republicans have to get tougher.”