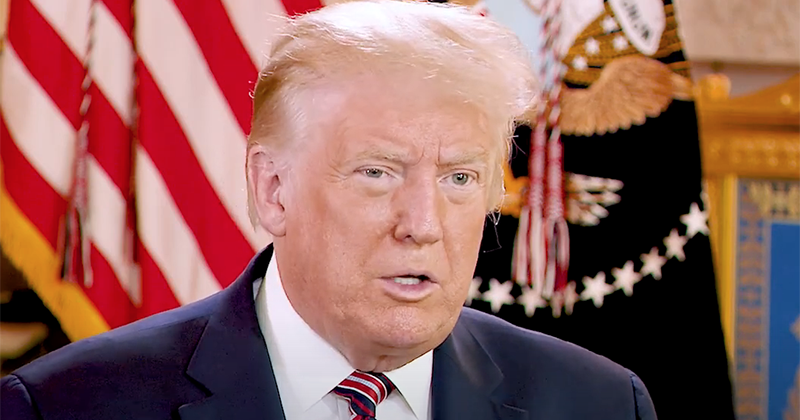 In an interview broadcast over the weekend, President Trump labelled Joe Biden’s running mate Kamala Harris as the “nastiest” Senator in America and warned that she is more of an extremist leftist than Bernie Sanders.

Speaking to Eric Bolling, Trump warned “She’s the nastiest of anybody in the Senate. She was the worst, meanest person to Judge Kavanaugh who became Justice Kavanaugh, I’ve never seen anything like it.”

“She’s not a person that’s liked. I think people will fall out of love with her very quickly,” Trump urged, adding that “She is a disaster. She is going to be a disaster, I think, for their party.”

Last week, many old videos of Harris being “nasty” were re-circulated online.

The President added that he has “heard actually that she is the most liberal person in all of Congress.”

“More liberal than Bernie Sanders, believe it or not,” Trump continued.

Trump was citing a recent GovTrack.us report that ranked Harris as the “most liberal” U.S. senator last year according to her voting record.

The figures show that Harris joined bipartisan legislation “the least often compared to Senate Democrats” in 2019.

The President again warned that Joe Biden is being coopted and used to forward a radical leftist agenda.

“Kamala’s a socialist,” Trump proclaimed, further warning that “[Biden] has been brought over. I guess he’s a socialist. If you asked him ‘what does socialism mean,’ he wouldn’t answer. He’s got no clue,” Trump said.

Last week Trump said that he is happy Biden has picked Harris, saying that the Californian Senator was his “number one draft pick”.

Within hours of the announcement, CNN published an article asserting that Harris would be able to take on the presidency if and when Biden decides to “step aside.”