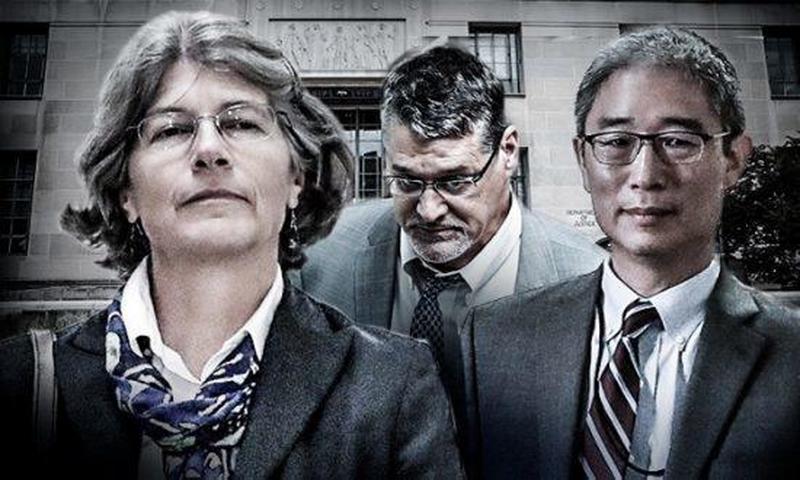 President Trump on Thursday renewed his vow to declassify a wide swath of “devastating” documents related to the Russia probe “and much more” – adding that he’s glad he waited until the Mueller investigation was complete.

In a Thursday night phone interview on Fox News, host Sean Hannity asked “will you declassify the FISA applications, gang of 8 material, those 302s – what we call on this program ‘the bucket of five’?”

Last September 17th, Trump vowed to release all text messages related to the Russia investigation with no redactions, as well as specific pages from the FBI’s FISA surveillance warrant application on former Trump campaign aide Carter Page, and interviews with the DOJ’s Bruce Ohr.

Four days later, however, Trump said over Twitter that the Justice Department – then headed by Attorney General Jeff Sessions (while the Russia investigation was headed up by Deputy AG Rod Rosenstein) – told him that it might have a negative impact on the Russia probe, and that key US allies had asked him not to release the documents.

“I met with the DOJ concerning the declassification of various UNREDACTED documents,” Trump tweeted. “They agreed to release them but stated that so doing may have a perceived negative impact on the Russia probe. Also, key Allies’ called to ask not to release. Therefore, the Inspector General has been asked to review these documents on an expedited basis. I believe he will move quickly on this (and hopefully other things which he is looking at). In the end I can always declassify if it proves necessary. Speed is very important to me – and everyone!”

I met with the DOJ concerning the declassification of various UNREDACTED documents. They agreed to release them but stated that so doing may have a perceived negative impact on the Russia probe. Also, key Allies’ called to ask not to release. Therefore, the Inspector General…..

….has been asked to review these documents on an expedited basis. I believe he will move quickly on this (and hopefully other things which he is looking at). In the end I can always declassify if it proves necessary. Speed is very important to me – and everyone!

That key ally turns out to have been the UK, according to the New York Times., which reported last September that their concern was over material which “includes direct references to conversations between American law enforcement officials and Christopher Steele,” the former MI6 agent who compiled the infamous “Steele Dossier.”

We now know, of course, that Steele had extensive contact with Bruce and Nellie Ohr in 2016, while Bruce was the #4 official at the Obama DOJ, and Nellie was working for Fusion GPS – the opposition research firm hired by Hillary Clinton and the DNC to produce the infamous Steele Dossier.

Last August, emails turned over to Congressional investigators revealed that Steele was much closer to the Obama administration than previously disclosed, and his DOJ contact Bruce Ohr reported directly to Deputy Attorney General Sally Yates – who approved at least one of the FISA warrants to surveil Trump campaign aide Carter Page.

Steele and the Ohrs would have breakfast together on July 30, 2016 at the Mayflower Hotel in downtown Washington D.C., while Steele turned in installments of his infamous “dossier” on July 19 and 26. The breakfast also occurred one day before the FBI formally launched operation “Crossfire Hurricane,” the agency’s counterintelligence operation into the Trump campaign.

Bruce Ohr was a key contact inside the Justice Department for ex-British spy Christopher Steele, who authored the anti-Trump dossier, which was commissioned by Fusion GPS and funded by the Hillary Clinton campaign and the Democratic National Committee through law firm Perkins Coie.

And who could forget that much of the espionage performed on the Trump campaign was conducted on UK soil throughout 2016. Recall that Trump aid George Papadopoulos was lured to London in March, 2016, where Maltese professor Joseph Mifsud fed him the rumor that Russia had dirt on Hillary Clinton. It was later at a London bar that Papadopoulos would drunkenly pass the rumor to Australian diplomat Alexander Downer (who Strzok flew to London to meet with).

Halper, a veteran of four Republican administrations, reached out to Trump aide George Papadopoulos in September 2016 with an offer to fly to London to write an academic paper on energy exploration in the Mediterranean Sea.

Papadopoulos accepted a flight to London and a $3,000 honorarium. He claims that during a meeting in London, Halper asked him whether he knew anything about Russian hacking of Democrats’ emails.

Papadopoulos had other contacts on British soil that he now believes were part of a government-sanctioned surveillance operation. –Daily Caller

In total, Halper received over $1 million from the Obama Pentagon for “research,” over $400,000 of which was granted before and during the 2016 election season.

No wonder the British government has “grave concerns.”

Now that the Deep State coup has been exposed, insiders say President Trump is ready to use every tool he has to finally defeat the Deep State. Alex explains how more than ever now is the time for patriots to support the president’s America First agenda.